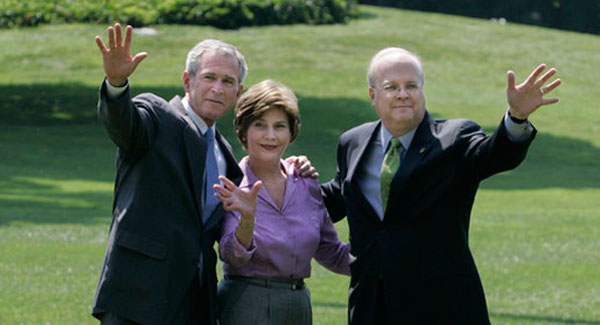 Members of the House Subcommittee on Commercial and Administrative Law didn’t even wait until the 10 a.m. mark to declare former presidential adviser Karl Rove a no-show this morning. The committee had subpoenaed Rove to appear to discuss the politicization of the Justice Department and allegations of selective prosecution of former Alabama governor Don Siegelman. But Rove, through his lawyer, asserted that “as a close advisor to the President,” he is “immune from compelled Congressional testimony.”

Committee Chairwoman Linda Sanchez (D-Calif.) was having none of that, saying, “I hereby rule that Mr. Rove’s claims of immunity are not legally valid, and his refusal to comply with the subpoena and appear at this hearing to answer questions cannot be properly justified.” In her official statement, she pointed out that if Rove wants to assert executive privilege, he still has to show up and do it before the committee, not in some lame letter from his lawyer. Sanchez observed that the Judiciary Committee has already seen a parade of witnesses from the White House who have not made this argument, most notably, David Addington, Dick Cheney’s chief of staff, who, while clearly hostile, did actually make the trip up the Hill to testify recently on the administration’s torture and interrogation policies. Scott McClellan, the former press secretary, even testified without a subpoena!

Rove’s arrogance has clearly irked Sanchez, who disparaged him for failing to cite a single court precedent that would back up his claim to absolute immunity from testifying. Quoting the Supreme Court, Sanchez said, “[n]o man in this country is so high that he is above the law,” and “[a]ll the officers of the government, from the highest to the lowest, are creatures of the law and are bound to obey it.”

Sanchez based her ruling on the quintessential Supreme Court decision on executive privilege, United States v. Nixon, which found that executive privilege is a limited one. The Nixon reference is apt: Sanchez notes that the Bush White House’s assertion of secrecy goes well beyond Nixon’s. While Nixon attempted to prevent his White House Counsel John Dean and other White House from testifying before Congress, he eventually relented, she notes.

Sanchez is particularly galled that the Justice Department and Rove are claiming he has immunity even though he is now a private citizen, which makes his claims all the more extraordinary. Not a single argument made by the Justice Department, Sanchez writes, applies to Newsweek columnists or Fox News commentators; there is absolutely no precedent to extending immunity to former government officials.

Still, Rove has been down this road before, with the Senate, asserting that he is immune from testimony because he says so. As he did last fall, White House Counsel Fred Fielding also sent a letter to Rove’s lawyer yesterday explaining that the White House has advised Rove not to testify based on the Justice Department’s determination that he doesn’t have to go.

Of course, the Justice Department is a dubious source of advice these days, given that the attorney general is facing his own subpoena from the Judiciary Committee. Michael Mukasey has repeatedly ignored requests from Sanchez and Rep. John Conyers to turn over documents related to the Siegelman prosecution and other oversight matters, so it clearly has a bias when it comes to deciding whether Rove ought to testify. But the department’s opinion on the subpoena were apparently enough to fend off Senator Patrick Leahey, who caved last fall on any attempts to force Rove to testify before the Senate Judiciary Committee.

Members of the House may not be so sanguine. Conyers and Sanchez have already asked a federal court to enforce a subpoena from the committee ignored by former White House counsel Harriet Miers, a move they took after the Justice Department refused to enforce the subpoena. There’s no reason to think that they won’t do the same for Rove. If he persists in ignoring them, one day he may have to pen his columns from a jail cell.