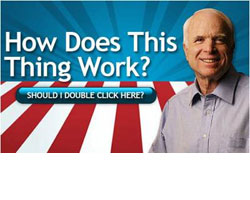 Political observers have made much of John McCain’s admission that he cannot use a computer without assistance. In a campaign where McCain’s opponent is 25 years younger than him, the factoid is potent ammunition for those who argue McCain is out of touch and too old for the presidency. But not knowing your way around a MacBook doesn’t mean you can’t be president. And McCain’s personal Ludditism isn’t a deal breaker for tech leaders. “I don’t give a damn if McCain ever turns on a computer or not,” Michael Arrington, coeditor of the blog TechCrunch wrote in January. “I just want a president who has the right top-down polices to support the information economy.”

And where is McCain on tech policy? Not so shockingly, the computer-free senator’s campaign is not as plugged in as his rival’s. In fact, his campaign website fails to address America’s lagging performance on broadband access or affordability, the technological capabilities of the federal bureaucracy, or the Internet’s ability to increase government transparency. “There are red flags,” says Brian Reich, author of the book Media Rules!: Mastering Today’s Technology to Connect With and Keep Your Audience and the former editor of Campaign Web Review, a blog that tracked the use of the Internet by candidates, campaigns, and activists.

Barack Obama has embraced the Internet, with his thunderous online fundraising and sophisticated MyBO website. (Plus, he’s comfortable talking about what’s on his iPod.) Unsurprisingly, high-tech leaders hail his comprehensive tech policies.

Last fall, Obama went to Google headquarters to unveil his proposals related to information technology. He covered the waterfront: broadband access, federal funding for the sciences, using the Internet as a tool to increase government accountability, and more. He promised to appoint the nation’s first Chief Technology Officer, a high-level staffer who will make sure that every federal agency has “best-in-class technologies” and uses best practices.

On his campaign website, Obama provides plenty of data on his information-technology stances:

Obama also calls for using technology to increase the transparency and effectiveness of the federal government. He has called for creating a single government website to track grants, contracts, earmarks, and lobbyist contracts. He’d like to see the business of federal agencies conducted over live feeds that can be watched by anyone with an Internet connection. He calls for the federal government to “employ all the technological tools available to allow citizens not just to observe, but also to participate” in these meetings. And there’s more: Cabinet officials hosting national town halls on the Internet; permitting members of the public to post comments on pending bills on the White House website; federal agencies employing blogs, wikis, and social networking tools. He’d like to see the US government as connected—and interconnected—with itself and the citizenry as technologically feasible.

The plan has won over techies. Stanford law professor Lawrence Lessig, a demigod of the tech community, endorsed the Democrat, saying, “Obama has committed himself to a technology policy for government that could radically change how government works.” Eric Schmidt, the chairman and CEO of Google, has said, “Senator Obama’s plan would help make sure that the Internet remains a free and open platform, and that America maintains an atmosphere of high-tech growth and innovation.”

John McCain, as of yet, has few such fans in the tech sector. His campaign website does not have a section about technology. Sprinkled throughout the site are a handful of references to tech issues. He promises to keep the Internet free of taxes, so “this engine of economic growth and prosperity” will not be threatened. He advocates the “rapid deployment of 21st century information systems and technology” that would allow “doctors to practice across state lines.” He would set up a $300 million prize for the developer of a “battery package that has the size, capacity, cost and power to leapfrog the commercially available plug-in hybrids or electric cars.”

But McCain’s site is most elaborate when it refers to the danger the Internet poses to America’s children, noting that McCain “has been a leader in pushing legislation through Congress that requires all schools and libraries receiving federal subsidies for Internet connectivity to utilize technology to restrict access to sexually explicit material by children using such computers.” It also reports that “John McCain has taken a hard line against pedophiles that would use the Internet to prey upon children by proposing the first-of-its-kind national online registry for persons who have been convicted of sex crimes against children.”

Though McCain echoes Obama’s call for greater government transparency, his website says little about how technology and the Internet can further that cause. There is no mention of increasing access to broadband. When asked about this in a ZDNet News questionnaire, McCain adopted a classically conservative approach, saying government policies should “promote competition and reduce regulation in order to secure lower prices and higher-quality services for consumers.”

His website also lacks a statement on net neutrality. When prompted, though, he has seemed to come out against it, saying, “When you control the pipe you should be able to get profit from your investment,” suggesting a philosophical opposition to neutrality. He has also made a dismissive reference to net neutrality as an attempt to “micromanage American business and innovation.”

The McCain campaign did not return an emailed request for comment.

Reich, the former editor of Campaign Web Review, isn’t willing to dismiss McCain’s thin tech stance out of hand. “Most policy development is done by advisers and staff, so just because he doesn’t have a technology policy that is clearly articulated doesn’t mean I’m going to give up on the prospect of John McCain being a supporter of future innovation,” he says. “But he does have various gaps to fill in.”

McCain’s problem is that Obama has raised the bar. “All the people I know in the technology space are backing Barack Obama and not John McCain,” says Reich. That provides McCain with little incentive to do better. “John McCain probably has thoughts and feelings on technology,” Reich adds. “But he doesn’t see it as an electoral priority to talk about the role technology is going to play in our society going forward, because he’s not going to raise any money from Silicon Valley liberals. I think it’s both a policy deficiency in his platform and a political deficiency in his strategy.”

Michael Cornfield, author of Politics Moves Online: Campaigning and the Internet and a founder of George Washington University’s Institute for Politics, Democracy, and the Internet, describes McCain’s approach to technology as “tangential.” In a charitable interpretation of McCain’s lack of an information technology platform, Cornfield points out that it mirrors the “classic Republican approach to the economy: laissez-faire, except where family values come into play. McCain doesn’t post any plans for technological development because the best plan from this perspective is, ‘Stay out of R&D’s way.'”

There is, of course, a less kind alternative. Andrew Rasiej, the founder of the blog techPresident and the Personal Democracy Forum, says, “McCain’s interest in tech policy is about as robust as the Horse Traders Association’s interest was in steam engines.”