The Washington City Paper reports that fliers have begun cropping up in northwest DC warning locals to “BEWARE!” of Montgomery McFate, the daughter-in-law of Mary Lou Sapone, the gun lobby spy who infiltrated the gun control movement. As we reported in late July, McFate, an anthropologist who currently serves as a senior social science adviser to the military’s Human Terrain program, once played a part in her mother-in-law’s intelligence gathering business. So did her husband, Sean McFate, who until recently served as a program director at the Bipartisan Policy Center, a Washington think tank.

The City Paper snapped a pic of the flier, which, coincidentally (or, perhaps, not), was spotted in Adams Morgan, around the corner from where Sean and Montgomery McFate reside. 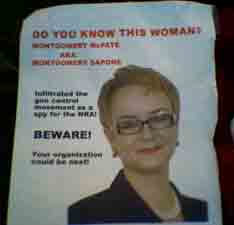