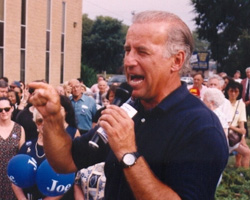 The chattering classes are buzzing with the possibility of Barack Obama choosing Sen. Joe Biden (D-DE), the six-term Senate veteran and chairman of the Senate Foreign Relations Committee, as his running mate. While the consensus seems to be that Biden would be a safe pick because of his foreign policy credentials and his long history of accomplishment, the question of whether or not he still supports the Biden Plan, a proposal for the partition of Iraq that was the centerpiece of Biden’s presidential campaign and is at odds with Obama’s withdrawal plan, is a potential stumbling block for the campaign.

When Biden, who initially supported the war, was running for president, he repeatedly insisted he was the only candidate with a workable plan for ending it. His campaign created a video, featured in the YouTube debate, that said, “Joe Biden is the only one with the experience and the plan to end this war responsibly so our children don’t have to go back.”

That plan was widely seen as calling for the partition of Iraq. It read, in part, “The United States should actively support a political settlement in Iraq based on the final provisions of the Constitution that create a federal system of government and allow for the creation of federal regions, consistent with the wishes of the Iraqi people and their leaders.” Despite Biden’s occasional objections, that wording was read by other politicians and the media as calling for the division of Iraq into three regions, one for Sunnis, one for Shiites, and one for Kurds. For that perception, Biden has himself to blame. An op-ed Biden wrote in 2006 described his plan this way:

The idea, as in Bosnia, is to maintain a united Iraq by decentralizing it, giving each ethno-religious group — Kurd, Sunni Arab and Shiite Arab — room to run its own affairs, while leaving the central government in charge of common interests….

The first [point of the plan] is to establish three largely autonomous regions with a viable central government in Baghdad. The Kurdish, Sunni and Shiite regions would each be responsible for their own domestic laws, administration and internal security. The central government would control border defense, foreign affairs and oil revenues.

The Biden Plan, as it was called, proved remarkably popular in the Senate — in September 2007 it faced a Senate vote and passed with the support of 75 senators, including 26 Republicans. The non-binding measure did not compel the President to act, only expressed the will of the Senate. Hillary Clinton and Chris Dodd voted with Biden; Obama and McCain did not vote at all.

The problem? Partition does not figure into Obama’s Iraq plan, which calls for withdrawing one or two brigades a month until all have been removed in 16 months. Under his plan, a residual force would remain “to conduct targeted counter-terrorism missions against al Qaeda in Iraq and to protect American diplomatic and civilian personnel.” A diplomatic effort bringing together all of Iraq’s neighbors would seek to maintain stability in the region. Partition is not mentioned. Obama was ambivalent about the Biden Plan in the primaries before Biden dropped out, suggesting that any partition plan originating in the US would be viewed with suspicious by the Iraqis.

In a July 2007 town hall event, Obama said, “[Partition] may end up being the best solution, but here’s the thing. We can’t impose it on the Iraqis. The Iraqis have to make the decision themselves…. If the Iraqi government believes that it can form a unified government they should do that. If they want a soft partition, they should do that. If they want us simply to leave, we can do that too. But they have to make a series of decisions.”

Biden seems to understands the conflict this situation could create. Speeches he gave on the Senate floor before his plan was put to a vote in September 2007 are not available on his website. The portion of the “Issues” page of Biden’s website devoted to Iraq acknowledges that the plan existed and was approved by the Senate, but makes no mention of partition along sectarian lines. Biden’s office did not immediately respond to questions about whether the senator still supports a partition approach. I will update this story if and when I hear back.

Evan Bayh, a Democratic senator from Indiana and the last VP option to experience a boomlet of expectations, was seen by many on the Left as an impermissible choice for Obama’s VP because he choose the wrong position on the Iraq War — he supported it when Obama didn’t. Biden seems to have the same problem and then some. He disagreed with Obama on going in, and may disagree with Obama on how to get out.

Update: Biden’s office confirms that Biden still supports the plan outlined in the New York Times op-ed. They refuse to use the word “partition,” however. If you like, you can read the op-ed and judge for yourself.