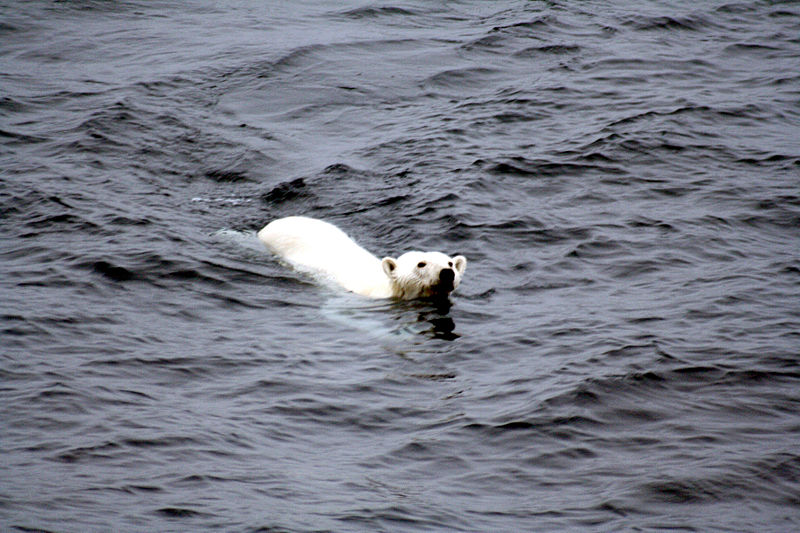 An aerial survey has recently found at least nine polar bears swimming in open water far off Alaska. One was at least 60 miles from shore. All could have difficulty making it back to land and are at risk of drowning, particularly if bad weather strikes.

“To find so many polar bears at sea at one time is extremely worrisome because it could be an indication that as the sea ice on which they live and hunt continues to melt, many more bears may be out there facing similar risk,” said Geoff York, polar bear coordinator for the World Wildlife Fund. “Polar bears and their cubs are being forced to swim longer distances to find food and habitat.”

The discovery of the nine bears at sea came as the US Minerals Management Service was conducting marine surveys in the Beaufort and Chukchi Seas in advance of potential offshore oil development. In May, the US Department of Interior listed polar bears as threatened under the Endangered Species Act. However, the state of Alaska has opposed the listing and has sued the federal government over its decision to list the bear.

Professor Richard Steiner of the University of Alaska’s Marine Advisory Program said: “The bottom line here is that polar bears need sea ice, sea ice is decaying, and the bears are in very serious trouble. For any people who are still non-believers in global warming and the impacts it is having in the Arctic, this should answer their doubts once and for all.”