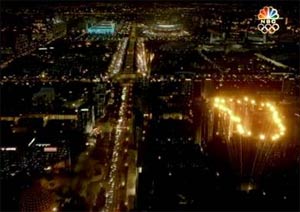 Sorry, the incredibly awkward shots of President Bush getting to his seat were all too real. However, it turns out that a climactic moment of the elaborate, 15,000-person-employing Olympics opening ceremony in Beijing on Friday was a clever bit of CGI. The jaw-dropping shot of sequentially-launched fireworks in the shape of footsteps heading towards the “bird’s nest” stadium was “a 3-D graphics sequence that took almost a year to produce,” conceived as an antidote to the smoggy skies which would have obscured actual footage. Not to act all smart or anything, but while watching the ceremony I noticed that not only did that segment have the slightly-hyperreal look of a Pixar film, but also, who could be filming it? Apparently that was also a concern: the Olympic committee was worried about the safety of a helicopter pilot who would have been forced to follow the route of the fireworks.

Various news organizations are reporting the footage was “faked,” although that seems a little harsh, since the committee came clean rather quickly. The segment in question was just so well done (and perfectly timed) that most people were taken in, and from what I can tell, they actually did launch those foot-shaped fireworks, so the CGI bit was more like a diagram of something really happening, which seems less sinful, somehow.

After the jump: but I thought I was immune to Olympics Fever!!

Speaking of being taken in, has anyone else had a rapid, unexpected onset of Olympics fever? I wanted to ignore it: annoyed at NBC’s delayed coverage, sick of all the steroids, perturbed by China, and creeped out by the just-as-secretive Olympic committee, whose ability to randomly point their fingers and have a whole city turn itself inside out makes them much more like the shadow world government that conspiracy theorists see in the United Nations. The opening ceremony was, indeed, jaw-dropping, but as Harper’s pointed out, viewers were forced to listen to non-stop slobbering China propaganda from NBC commentator Joshua Cooper-Ramos, who turns out to be a buddy of Henry Kissinger, who happily profits off U.S. firms doing business in China. Despite all this, I immediately succumbed to the drama of the sports, staying up late watching the U.S. women’s soccer team eke out a victory over Japan, hilarious 2-on-2 beach volleyball (it’s apparently a real sport), superhuman gymnastics, and the even-more-superhuman swimming. On HD, NBC’s coverage has been visually stunning, including breathtaking shots of wide-eyed anchors in Tiananmen Square, and even the commercials are Super Bowl-level. [Edit: well, mostly.] Apparently everybody else agrees: NBC and its fleet of subsidiary channels also carrying wall-to-wall coverage are drawing record ratings, with 114 million viewers tuning in during the first two days, 20 million more than the 2004 Athens games. The real test will come on Wednesday night, when I’ll be force to choose between Project Runway and the men’s gymnastics final. It’s enough to make a guy get a TiVo.