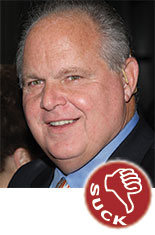 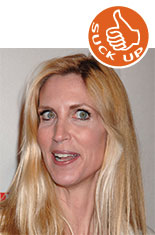 Pope Benedict: A former “Nazi” who heads a “child-abusing cult”

Richard Dawkins: The atheist scientist’s book “someday will be by the bed at every hotel in America.”

George Clooney: “Why can’t more people be like him?”

Rush Limbaugh: “Why couldn’t have he croaked from [OxyContin] instead of Heath?”

Heritage Foundation, Project for the New American Century: “You can’t call yourself a think tank if all your ideas are stupid.”

Arianna Huffington: He and the “seductive” salonista are “like an old married couple, except instead of having obligatory sex on our birthdays, we blog.”