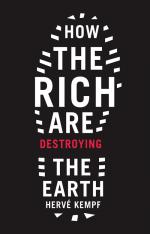 On his way out of the Tokyo G8 summit on climate change last July, President Bush famously punched the air and announced with his trademark grin, “Goodbye from the world’s biggest polluter!” At that moment Dubya could have been the mascot for Herve Kempf’s How The Rich Are Destroying the Earth, a polemic about the world’s wealthiest people, who treat global warming like an inconvenient joke.

The villains of Kempf’s book are familiar: an oligarchy that consumes greedily and a capitalist system that inspires others to do the same. The rich insulate themselves from the environmental havoc they wreak, while the poor pay the price, with skyrocketing asthma rates and living quarters near dumps. Kempf, an environmental reporter for the French newspaper Le Monde, navigates this well-worn territory with confidence and clarity. But when it comes to making his main point—that the rich are singularly responsible for environmental downfall—his case falls apart.

In Kempf’s world, rich people are really rich. His example of a typical “greedy glutton” is Paris Hilton; his laundry list of common extravagances includes yachts with basketball courts and movie theaters and daylong trips by private jet to fantasy islands, and leisure trips to the international space station. It’s a fun section to read, in a Lifestyles of the Rich and Famous way. And Kempf’s sardonic commentary sizzles: “To tell the truth…space flight already has a little vulgar aspect, too look-at-me,” he writes. “I’d advise you to buy a cruise submarine instead.” What’s missing, though, is the regular rich people—the kind that can afford two SUVs, maybe a country house or two. There are, after all, a lot more run-of-the-mill wealthy people than Warren Buffetts, and I’d guess that all those SUVs do more harm than private jets.

Kempf does briefly argue that these ordinary rich learn their habits from the super rich, but this theory of imitation seems like an afterthought. And with all his descriptions of celebrity trends, he seems to have overlooked Hollywood’s current solar-panel frenzy: Among celebrities, living light on the land (or at least looking like you do) is in. If Kempf’s trickle-down theory is correct, then will ecofashion eventually make its way to the masses?

The past few weeks have proven that greed can hobble the economy and How the Rich Are Destroying the Earth begins to make the case that it can destroy the planet. But the financial collapse, it turns out, is more complicated than many of us suspected, and our environmental problems require sophisticated analysis, too. In the end, Kempf’s general dressing down of capitalism isn’t enough. “Naïve comrades,” he warns, “there are evil men on earth.” If only it were that simple.