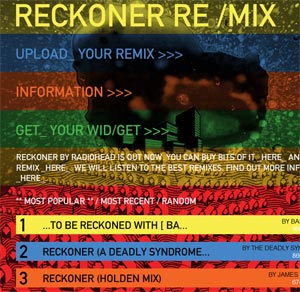 You gotta give it to Radiohead: they know how to use that internet. While other bands fret about file-sharing or unauthorized mashups and remixes, Thom Yorke and his merry bandits gave away 2007’s In Rainbows for free, if you wanted, and happily sold the individual instrument tracks from the song “Nude” on iTunes a few months back so amateur remixers could have their way with them. Now they’ve done it again, with (in my opinion) a slightly more compelling track from In Rainbows, the haunting “Reckoner.” The band have set up a “Reckoner Remix Project” web site where producers can upload their tracks and fans can listen and vote for their favorites. There doesn’t appear to be any prize (other than the possibility Mr. Yorke himself might pop your mix onto his iPod) and the fine print makes it clear that Radiohead owns everything, always and forever, but it’s still pretty interesting to see what people have come up with.

According to Pitchfork, both Diplo and James Holden cheated, as their remixes were requested by the band for the site. Holden’s is the more intriguing (although it sure takes a while to get going), while Diplo’s vaguely-Bmore beats sound kind of plug-and-play. Hip-hop producer (and Party Ben fave) Flying Lotus has a version in the top ten, complete with his signature static and fuzz, but there’s something a bit off about it—dare I say it’s out of key? The #1 highest ranked mix, with over 900 votes, is by someone called “Baskfield”; it annoys me from the get-go, with inexplicable staccato effects on the vocals that sound like mistakes. Clearly somebody has a “vote for me” campaign going on. My favorite at the moment is the #2 version by The Deadly Syndrome, a jittery mid-tempo take that adds retro-flavor Daft Punk beats and buzzy videogame-style beeps yet doesn’t come off as silly. On the contrary, it adds a Kraftwerk-like delicacy to the profound melancholy of the original. Listen to all the mixes and vote here.

I’d submit a remix, by the way, but I’d probably just want to mix the vocal with, like, “Owner of a Lonely Heart,” and that’s not allowed.