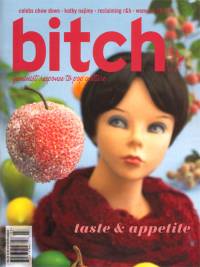 Bitch, the 12-year old feminist pop culture magazine, recently announced that it needs to raise $40,000 by the middle of October in order to cover printing costs of its next issue.

The situation Bitch is facing is all too common in the magazine industry, especially among independent publications. But what’s particularly difficult about Bitch‘s situation may have something to do with the magazine’s advertising policy.

At any magazine, there’s always a question lingering in the background: What happens when you publish ideas that are controversial to the institutions that actually pay for the magazine? Like many independent magazines, Bitch doesn’t make that much money from advertising. The magazine is perfectly up front about this, explaining that:

Bitch, on the other hand, is loyal—and accountable—to its readers. We’re in this together, which is why we call ourselves a reader-supported magazine. Think of us as the print version of listener-supported radio.

In other words, Bitch won’t accept all ads, only the ads from companies it, well, likes. Companies “with products and services are aligned with our mission.” (Mother Jones, incidentally, does not have such a policy on advertisements—this magazine accepts most ads and promises not to let advertisers’ interests affect editorial content. Not everyone is thrilled about that.)

This is not to say Bitch has chosen the “wrong” ad policy. There are plenty of good reasons to turn down ads if they don’t fit with a magazine’s mission, and Bitch‘s spirit of independence is inspiring. In practical terms, however, this puts Bitch in an emergency situation where it has to raise $40,000 in the next four weeks.

The fact of the matter is that most periodicals—except for the notable exception of the ad-dominated cash cows that are women’s magazines (the other kind)—aren’t exactly lucrative, whether the advertisers make things that are hazardous to your health, are ideologically questionable or responsible for numerous disreputable products.

The demise of Bitch would be a major loss, as the magazine provides a valuable service as a fresh voice for contemporary feminism. But the problem is not just what happens by October 15th but also what happens the month after that and after that…