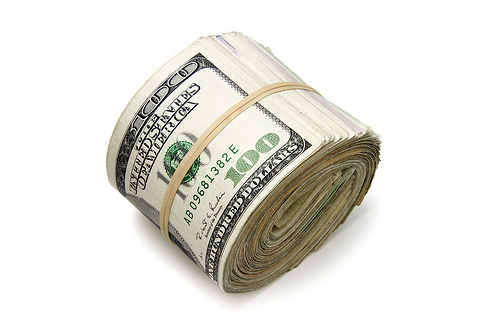 During his victory speech, President-elect Barack Obama told the world that “if this financial crisis taught us anything, it’s that we cannot have a thriving Wall Street while Main Street suffers.”

It seems Wall Street didn’t get the memo. All nine banks about to get a total equity capital injection of $125 billion, courtesy of phase one of the bailout plan, reserved $108 billion during 2008 in order to pay for compensation and bonuses (.pdf). Guess who’ll end up footing the bill?

Helping to pay these awards was not supposed to be part of the bailout plan. On the contrary, when the Senate, including Obama, approved the $700 billion package in October, Federal Reserve Chairman Ben Bernanke and Treasury Secretary Hank Paulson called this package one that would loosen the credit markets. The idea was that banks would start lending to each other again, as well as to citizens and small businesses.

That hasn’t happened, which is why it’s particularly offensive that this no-strings-attached money is going to line the pockets of the biggest executives on Wall Street. Goldman Sachs, the country’s top investment bank (which since September 21 calls itself a bank holding company), set aside $11.4 billion during the first nine months of this year to cover bonus payments for its 443 senior partners and other employees. That’s one-third less than last year’s amount, but only slightly more than the firm’s $10 billion US government gift. Economic woes notwithstanding, those partners are still expected to make at least $5 million each. While Wall Street may not believe in higher taxes for the richest citizens, it does believe in higher bonuses for top executives. The bulk of bonus money on Wall Street concentrates there, after ferocious internal discussions about how much each person’s contribution to the firm is worth, no matter what the market conditions are on the outside. Trust me, I witnessed too many of these during my time on Wall Street. They are exercises in pure, unadulterated whines of entitlement.

Goldman’s CEO, Lloyd C. Blankfein, bagged a record bonus last year of $67.9 million, including $26.8 million in cash. That amount was nearly double the $38 million that Hank Paulson made at the firm in 2005, the year before he became the treasury secretary, a post for which he received unanimous approval from the Senate in 2006.

Last year, when the financial crisis was just in brewing mode, the top five investment banks paid themselves $39 billion in compensation and bonuses, up 6 percent from 2006. Two of those firms, Bear Stearns and Lehman Brothers, went bankrupt this year. Bank of America is acquiring a third, Merrill Lynch. The remaining two, Morgan Stanley and Goldman Sachs, have seen their stock values plummet more than 60 percent.

Yet that didn’t stop their election money from pouring out. Goldman was Obama’s largest corporate campaign contributor, with $874,207. Also in the Obama top 20 were three other recipients of bailout capital injections: JPM, Citigroup, and Morgan Stanley. In the spirit of not sacrificing Main Street for Wall Street, this shouldn’t matter.

Last week (.pdf), House Oversight Committee chairman Henry Waxman (D-Calif.) gave the bailout capital recipient firms until November 10 to come up with some darn good reasons to be paying themselves so much. Specifically, he requested detailed information on the total and average compensation per year from 2006 to 2008, the number of employees expected to be paid more than $500,000 in total compensation, and the total compensation projected for the top 10 executives.

Similarly, New York state attorney general Andrew Cuomo demanded information about this year’s bonuses, requesting a detailed accounting of expected payments to top management, including the size of the firm’s expected bonus pool both before and after knowing that it would be a recipient of taxpayer funds.

As Cuomo told the firms, “The American taxpayer has provided substantial funds to your firm; the preservation of those funds is a vital obligation of your company. Taxpayers are in many ways now like shareholders of your company, and your firm has a responsibility to them (.pdf).”

House Financial Service Committee chairman Barney Frank (D-Mass.) concurred. “Any use of the these funds for any purpose other than lending—for bonuses, for severance pay, for dividends, for acquisitions of other institutions, etc.—is a violation of the terms of the [Troubled Assets Relief Program] Act.” Next week, his committee will hold oversight hearings on the matter.

To combat these inquires, Wall Street has gone into its best defense mode, projecting an aura of being accommodating and self-deprecating (because it is shedding jobs, too), in order to remain in its status-quo state of self-regulation. Banks are going to tell Congress that of course they won’t use that $125 billion for bonuses—it will go to shoring up balance sheets and for acquisitions just like they promised, whereas the bonus money will come from earnings, as it always does.

If that sounds like accounting prattle, it’s because it is. It doesn’t matter where in the balance sheet capital comes from or goes; the point is, there’s more of it because of taxpayer redistribution in the wrong direction than there would have been otherwise, and that is not just.

According to Gar Alperovitz, economist and coauthor with Lew Daly of the book Unjust Deserts, that beautifully explains why too much money goes to those whose contributions are marginal compared to the historical contribution of others before them. “We’re making homeowners take a big hit, and if there’s any justification for any of these bonuses, which is dubious, sharing that burden is important.”

That’s not quite the sharing that Wall Street wanted from the bailout package, but if “change has come to America,” as per Obama’s promise, then it’s time for Wall Street to shoulder its share. Taxpayers will not be getting a personal return on their capital from Goldman Sachs partners. Getting involved in decisively saving taxpayer money from being distributed to the likes of Lloyd Blankfein before these payments are made would be an excellent way for Obama to invoke immediate change.