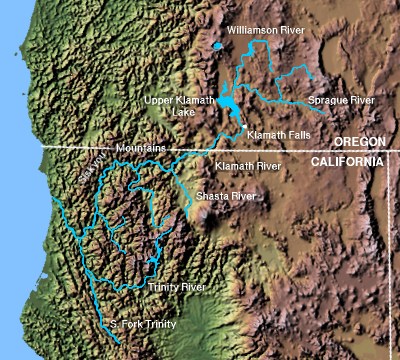 A tentative agreement has been reached to begin decommissioning four aging dams on the Klamath River—the largest dam-removal project ever undertaken. The agreement marks a major shift in the battle over Klamath water, reports AAAS.

The Klamath flows from southern Oregon through northern California. It’s the third most important salmon river in the lower 48 after the Columbia and Sacramento. The dams provide cheap renewable energy and irrigation for farmers but not enough water for salmon. During the 2001 drought, federal officials shut off the irrigation water for the sake of the fish. In 2002, after protests from farmers, they reversed course and shunted flows back to Oregon’s potato and alfalfa fields. At least 33,000 salmon died as a result of that decision, in one of the worst salmon kills in US history. In 2007 declining salmon in the Klamath produced a severely curtailed commercial fishing quota. Everyone got burned. Fish worst of all.

According to the new agreement, the dams will come down starting in 2020. Before that, scientists and engineers have to figure out what to do with all the silt accumulated behind them. Loosing the silt into the river’s flow will likely suffocate everything downstream. Meanwhile Oregon and California will also use the time until 2020 to raise money to pay for the dam removal. Under the agreement, PacifiCorp customers will pay a 2% surcharge on their utility bills to raise up to $200 million for the dam removal. California is expected to issue general obligation bonds to raise an additional $250 million.

The salmon wars aren’t over yet, though. The agreement is non-binding. Plus it was reached between the US Department of Interior, California, Oregon, and the utility company PacifiCorp without consulting customer advocates, Native Americans with water rights, or environmental groups.

The Bush administration has long opposed dam removal. And Interior Secretary Dirk Kempthorne is a vigorous opponent of dam removal in his native Idaho. Now he hails the Klamath agreement as a big victory. Hopefully it will be. But let’s also hope the era of the Imperial Anti-Environmental Interior Department will go away forever on January 20th 2009.