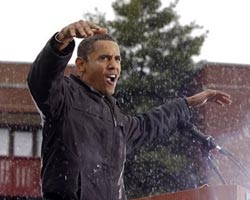 
Liberals have been feeling pretty energized about this year’s election. And why not? While Barack Obama might not be the “most liberal member of the Senate,” as National Journal claimed in January (10th or 12th is more like it), he’s still a fairly reliable progressive on this year’s key issues of health care, foreign policy, and climate change. His energy plan, in fact, is the best we’ve seen from a prominent national politician in—well, forever, and even his reluctant acceptance of increased offshore drilling if it’s part of a “comprehensive” package demonstrates a welcome desire to actually get things done instead of holding out for the impossible. Democrats are almost certain to increase their control of both the House and Senate, which means that a President Obama would need crossover votes from only a handful of moderate Republicans to pass major legislation.

So that’s that. Elect Barack Obama and it’s smooth sailing starting at noon on January 20. Right?

If only. This is the thing that keeps me up nights about the Obama campaign: I can’t help wondering whether he can actually get any of his agenda passed. It’s one thing to win an election, but another to build a movement that makes an impact for years. (And if Obama loses? Then it’s really back to the sustainability drawing board.)

So what will that take? In the same way that sustainable development is built on social, environmental, and economic pillars, you might say that political sustainability is built on three pillars: congressional majorities, electoral coalitions, and public opinion. Those are Obama’s big challenges.

The first one is the easiest to deal with. Not only will Democrats probably have a bigger majority next year (even Republicans have pretty much given up on doing anything more than contain their losses in November), it’s likely to be one of the most liberal Democratic caucuses ever. Past Democratic majorities may have been durable—until 1994, anyway—but they’ve also included so many conservative Southerners that, for all practical purposes, they were center-right. (The only exceptions came during a couple of brief periods in the first terms of FDR and LBJ—though even then the seniority system gave conservative Southerners control of many key committee chairmanships.)

But those days are gone. Genuinely conservative Democrats are largely a thing of the past and today liberals hold most of the key chairmanships. Obama—who got plenty of primary endorsements from his Senate colleagues, has an experienced legislative staff headed up by Pete “101st Senator” Rouse, and has shown an impressive ability to work across the aisle—will almost certainly have a congenial Congress at his disposal. He just needs to persuade it to take some political risks.

Obama’s electoral coalition is a different story. It’s usually described as a combination of African Americans, upscale whites, and the young—hardly natural allies. What’s more, other elements of the classic liberal coalition (labor, for example) have been late, and sometimes lukewarm Obama supporters; the abortion rights group naral‘s endorsement of him, even though it came near the end of the primary season, caused massive blowback within the organization’s own ranks.

So this is the state of play: If elected, Obama will be dealing with a Congress that’s fundamentally on his side but cautious about taking political risks, and an electoral coalition that’s hopeful but keenly sensitive to possible slights. This isn’t a bad place to start from—just ask Ronald Reagan—but it can also be a pretty slippery place to start from—just ask Bill Clinton. The difference between the two, the difference between large-bore change and small-bore change, rested on control of public opinion.

Here, too, Obama starts on favorable ground. After eight years of Bush/Cheney, the public is increasingly ready for serious action on a raft of big issues. And Obama is, of course, a terrific public speaker. But watching him in action for the past year, one thing has become more and more clear: He doesn’t seem inclined to use his oratorical skill to truly shape public opinion. He’s only using it to win votes.

Franklin Roosevelt, that most subtle thermometer of public opinion, understood the difference. In a possibly apocryphal story told by I.F. Stone, FDR once met with a group of reformers who explained at length why he should support their cause. “Okay, you’ve convinced me,” he told them. “Now go on out and bring pressure on me.”

FDR—even with huge congressional majorities and a solid electoral coalition—knew he needed outside help to shift the electorate. But he knew how to do his part as well. His early fireside chats weren’t just national pick-me-ups; they were designed from the first word of the first sentence to build public support for liberal ideas. Likewise, years later, when he was trying to persuade an isolationist American public to actively oppose the Nazi occupation of Europe, he gave a folksy speech comparing Lend-Lease with the loan of a garden hose to a neighbor whose house was on fire. It worked: With the public on board, Congress passed the enabling legislation and Britain survived long enough for America to join the war. Majorities may come and go, but FDR built a liberal legacy that outlasted him because, by the time he left office, the public believed in the New Deal and everything that went with it.

Now fast-forward 70 years and ask yourself, What is it going to take to pass serious climate change legislation? A liberal majority in Congress? Check. Interest groups willing to rally? Check. But to paraphrase an old military saying, the opposition gets a vote too. And the opposition’s message to a public already tired of high gasoline prices is going to be simple: Liberals want to raise energy prices. Your energy prices.

And make no mistake. Barack Obama’s cap-and-trade plan to reduce carbon emissions may be technically one of the best we’ve ever seen, but it will raise energy prices. That’s the whole point. So once the public understands that there’s more to Obama’s plan than green-collar jobs and serried ranks of windmills on the Great Plains, they’re going to have second thoughts. And those congressional majorities, who face election in another couple of years, are going to have second thoughts too.

The right way to address this won’t be found in any of Obama’s white papers. There’s a story there, if you dig deep enough, but it’s long and complicated and relies on things like increased efficiency, consumer rebates, and R&D funding that pays off in another decade or so. In the short term someone is going to have to tell the public that, yes, there’s some sacrifice required here, but it’s worth it. Someone needs to come up with a garden-hose analogy to convince a financially stressed public that doing something for the common good is worth a small price.

That someone, of course, is Barack Obama, but it’s not clear yet if he gets this. His speeches soar, but they rarely seem designed to move the nation in a specific direction. Is he pushing the public to support cap and trade even though it might cost them a few dollars? Or merely to vote for “change”? It’s sometimes hard to tell.

This is hardly an original concern. Liberal pundits have been stewing for months over the question of whether Obama is too cautious to win big victories, too invested in a narrative of bipartisan unity to get his hands dirty in a real street fight. As a former community organizer he understands the power of direct action, but does he understand how to shift public opinion on a national scale? And is he willing to try?

Because that’s what it’s going to take to build a sustainable progressive movement: a public that’s firmly committed not just to change, but to specific change. A public that makes it clear to Congress that it wants—and will reward members who support—universal health care, withdrawal from Iraq, and serious action on global warming. That it supports a broader, more dynamic vision of collective action in the service of the public good. And not for 100 days, but for years to come.

Maybe Obama will get there. After all, FDR himself ran a notably fuzzy campaign in 1932, becoming the master of public opinion only after he was safely elected. But one way or another, Obama needs to make the transition from inspiration to leadership. In politics, public opinion is at the root of every enduring movement. It’s time for him to get working on it.