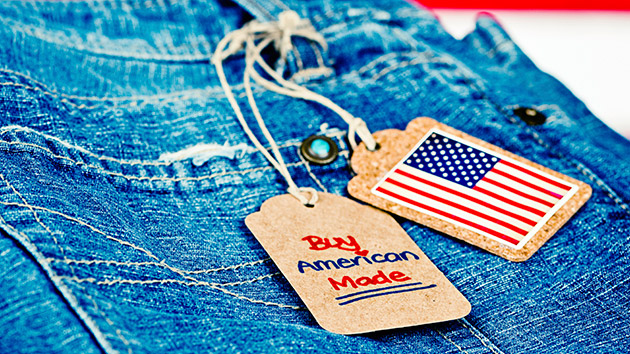 I had been cursing up and down the aisles at the grocery store for half an hour when I finally found a can of black beans claiming to be “100% usa family farm organically grown.” I was on a weeklong mission to buy only American-made goods, and my very first shopping trip had turned into a debacle. I’d been forced to put back the bananas, cherries, coconut, and chipotle peppers, and I was about to blow $15 on a tiny bottle of US-made olive oil.

I was hoisting the beans triumphantly above my head when my roommate approached. “What about the packaging?” she asked. I scowled at her. More of the world’s aluminum comes from China than from anywhere else; the only way to know the origins of this particular can was to call the company—and it was Saturday. “Buying American is such a pain in the ass!” I wailed.

In 1990, when I was in grade school, I watched a union-sponsored commercial in which a mother told her little boy that they would have to move because Dad had lost his job—too many people were buying imports. As union jobs dried up, so did that campaign; now, 14 years into nafta, buying local is hot, but buying American is, at best, a joke (though in August Barack Obama dusted off the sentiment with his “Buy American, Vote Obama” slogan). When I told Scott Paul, executive director of the Alliance for American Manufacturing, that I was going to buy only American for a week, he laughed. “I’m very sorry to hear that.

“It’s exceptionally hard, if not impossible, to be 100 percent pure,” he explained. “There are just some things you can’t buy. It’s incredibly difficult and depressing.”

Organic. Independent. A host of considerations drive my shopping habits, and I’d had a vague idea that “Made in” stickers ought to as well. But it wasn’t until I actually tried that I realized how hard it is: To start, there’s not a single marginally comprehensive listing of American-made products. Sure, you can search the databases at the afl-cio‘s UnionLabel.org and ShopUnionMade.org. But the selection is…slim. BuyAmerican.com is a store that features exactly one sweater, and man, is it ugly. And companies that do manufacture in the US don’t seem to bother using it as a selling point. When I asked the shop-floor guy at New Balance, which produces some shoe styles domestically, whether they had any US-made clothes, he demurred. “There’s really no call for that, so it wouldn’t make sense.”

I’d been putting off buying a bra, so I added it to my shopping list. The thought of American Apparel’s Dov Charney making my underwear in between fighting off sexual-harassment lawsuits didn’t really appeal, and I knew enough to rule out Victoria’s Secret (Sri Lanka), H&M (Turkey/Cambodia), and Gap (Singapore/Bangladesh/Bahrain). So I headed to Nordstrom. After checking several dozen tags, I advanced on a saleswoman. “Excuse me,” I apologized. “Do you have any bras that were made in America?”

“Ooh,” she said, as if I’d just handed her something foul smelling. “That’s a good one.” She started to point, then stopped. “No, those are manufactured somewhere else,” she mumbled. “No,” she shrugged, scanning the vast lingerie selection. “There aren’t any.”

Anything I needed during that long week required hours of research and dozens of phone calls. Expensive domestic apples and strawberries busted my grocery budget. I’m still wearing a made-in-the-Philippines bra I bought in 2005. I failed my assignment and my country when out of desperation and frustration, respectively, I bought a pack of Sony CDs and a jar of peanut butter of dubious origin. The issue wasn’t whether I could buy American—clearly, I couldn’t. No, the real question was, Why should I even try?

I called Ravi Batra, a Southern Methodist University economics professor and best-selling author of The Great Depression of 1990, who reminded me that “it’s important to revive our manufacturing base and create high-paying jobs.” The US lost 212,000 manufacturing jobs last year alone, and the average manufacturing job pays $713 per week, nearly twice as much as the average retail gig. When wages go up, there’s more employment because people buy more. When wages go down, people use credit. Patching this imbalance with debt means…well, we just found out. “In the end,” Batra said gloomily, “there’s a huge economic debacle.”

While that’s sort of compelling, not everyone agrees with that school of thought. “What’s really important is that even if I’m not buying American, other countries are buying some American stuff,” Vinod Singhal, Georgia Institute of Technology professor and editor of the industry publication Manufacturing & Service Operations Management, told me. “That’s what trade is all about.” Singhal allowed that there are practical reasons to buy American: Consumers are better assured that their purchase won’t be coated with lead, or made by third-graders. But in the broader economic picture, overall US employment has remained steady despite our growing trade imbalance, and we still dominate in some high-tech, high-value areas. In 2007, US manufacturing sales were a record $5 trillion. Let Vietnam make our T-shirts, the argument goes; we’re making jet planes. “It’s a very resilient economy, and generally the economy bounces back when it’s pushed to the edge,” Singhal concluded. “I’m very confident about how America will respond to these kind of challenges. When the pain goes beyond a threshold level, that’s when you tend to react.”

I suppose. And granted, as a former English major I am in no way qualified to settle a long-standing dispute between the let-the-markets-rule camp and the save-domestic-industry set. But if the fact that I actually started clapping when I discovered American-made wax paper at Walgreens is any indication, the time to react might have arrived.