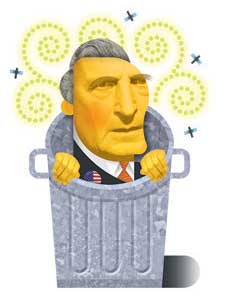 
Of the more than two dozen retiring members of Congress, some will be dearly missed (Godspeed, Chuck Hagel!), while others…not so much. Democrats are absent from our list not because they have a franchise on good behavior (we’re talking to you, “Dollar” Bill Jefferson), but because few are retiring this year and none of them are actually under indictment.

Rep. John Doolittle (R-Calif.)
Why: Under investigation in connection with the Jack Abramoff and Brent Wilkes scandal
In His Words: “I needed to not run again.”
About Time: His long history of blurring congressional and family business included paying his wife nearly $200,000 in fundraising commissions.

Rep. Duncan Hunter (R-Calif.)
Why: Passing the torch to Duncan Jr.
In His Words: As Hunter mounted a doomed campaign for the presidency, a spokesman announced, “Congressman Hunter does not intend to run for two offices simultaneously.”
About Time: With ties to Brent Wilkes and Duke Cunningham, Hunter has long been accused of swapping earmarks for campaign cash. Duncan Jr. seems poised to follow in his father’s footsteps, already receiving contributions from the beneficiaries of Hunter-sponsored earmarks.

Rep. Rick Renzi (R-Ariz.)
Why: 35 excellent reasons, according to his indictment
In His Words: No comment.
About Time: Fraud, conspiracy, money laundering, extortion…’nuff said.

Rep. Jerry Weller (R-Ill.)
Why: Ask his Nicaraguan real estate agent.
In His Words: “I need to give my family the time needed to be a full-time dad and full-time husband.”
About Time: Accused of using his congressional clout for private profit, Weller masked the extent of his Central American land dealings.

Rep. Vito Fossella (R-N.Y.)
Why: Got caught
In His Words: “[I] need to concentrate on healing the wounds that I have caused to my wife and family.”
About Time: Before he was felled by a drunk driving and adultery scandal, Fossella had a rep for mixing business with pleasure, using campaign funds for things like ski lessons for his family.