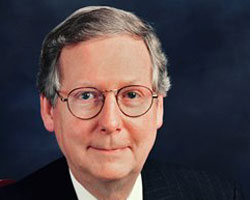 Having narrowly survived his reelection campaign, Senate minority leader Mitch McConnell (R-Ky.) was in an expansive mood Thursday morning. Back to work in Washington, he spoke at the annual convention of the Federalist Society, the powerful conservative legal organization. Acknowledging his recent close shave, McConnell elicited some laughs from the friendly crowd by noting that in campaign ads, Democrats had called him the biggest impediment to progress since Antonin Scalia, who also happens to be one of the group’s legendary heroes. “They elected me anyway,” he deadpanned.

Far from being demoralized by the brutal campaign, McConnell declared that he was “refreshed and energized by the battle. Churchill said the most exhilarating thing in life is to be shot at and missed.” Yet McConnell still seemed somewhat chastened by his near loss. In fact, during his speech, the man who had almost singlehandedly obstructed campaign finance reform for decades and who led GOP efforts in recent years to block increases in the minimum wage and health coverage for children sounded downright moderate. Indeed, far from coming out guns a-blazing, which would have played well with the sympathetic crowd, McConnell spent the bulk of his time saying surprisingly nice things about President-elect Barack Obama.

McConnell offered some advice to his former Senate colleague, whom he said has “the potential to be an impressive president…He seems serious and competent and, most importantly, he convinced the voters that he would help them in a time of economic crisis.” McConnell spoke approvingly of Obama’s plan to cut taxes for 95 percent of Americans and his promise to tackle entitlement reform and energy security.

Echoing a new GOP talking point, McConnell said he hoped that Obama would govern as he had campaigned—from the middle, which is not, he observed, what new presidents usually do, a veiled reference to Bill Clinton’s gays-in-the-military debacle. “My challenge to him is to do big things while he has the maximum amount of political capital, on a bipartisan basis,” he said. McConnell noted that back in 2004, Obama had observed that one of the biggest mistakes President Bush had made in his first year in office was to push an aggressive agenda that was not what he campaigned on. At the time, Obama had said he would advise John Kerry, if elected, to stick to his campaign pledges.

McConnell recommended that Obama take his own advice and “put the partisan laundry list aside.” He warned that if Obama took on the other issues, such as the unions’ desire to provide workers with an option other than secret ballot voting on union membership, Obama would be in for a big fight that would cost him an enormous amount of good will in Congress. (The Federalists practically leapt from their seats when McConnell mentioned the union issue.) He acknowledged that the Democrats controlled Congress, but reminded Obama that if he failed to win bipartisan support for his initiatives, the blowback would be substantial and the Democratic majority could easily evaporate in two years. “My preference is that we address big things,” McConnell said, mentioning the looming effects of the baby boomers’ retirement on Social Security (an issue that during the campaign, Obama ranked well below the current economic crisis, health care, education, energy independence, and ending the war in Iraq).

Lest any of the true believers in the room start to suspect that McConnell had switched parties, he did throw the crowd some red meat on one of their favorite subjects: judicial nominations. McConnell argued that Senate Democrats had completely distorted the confirmation process. He recalled that in 2001, two of Obama’s legal advisers, the Harvard law professors Cass Sunstein and Laurence Tribe, suggested changing the judicial nomination hearing process to take into account political as well as legal philosophy. Much to his chagrin, he said, Sen. Charles Schumer (D-N.Y.) held hearings on the idea, including one titled, “Should ideology matter?”

At those hearings, McConnell claimed Schumer and other democrats said it would be important to have “ideologically moderate” judges on the bench, which McConnell took to mean judges who sympathized with certain groups rather than sticking to the law in front of them. He bashed Senate Democrats for holding up Bush’s judicial nominees when Bush was doing nothing but sticking with the ancient criteria of ensuring that his nominees were competent and intelligent jurists. With a look of horror, McConnell quoted Ted Kennedy (D-Mass.), who said during the nomination hearings for Chief Justice John Roberts, “Whose side is he on?” (Of course, the Federalists and their Republican allies also ask that question of GOP judicial nominees, particularly on the issue of Roe v. Wade, but that, apparently, is not an ideological question but simply a legal one in this crowd.)

McConnell observed that Obama has said one quality he would seek in a judicial nominee is empathy, a view that McConnell derided as “unorthodox.” He warned that Republicans would not sit quietly if Obama nominated judges based on ideology—i.e., which side they’re on—as opposed to fealty to the law (at least the law as McConnell sees it). “We can’t countenance a process where judges would favor one side in litigation,” he roared. The Federalists rose in unison to give the Senate minority leader a standing ovation, a reception he’s not likely to get on the Senate floor anytime soon.