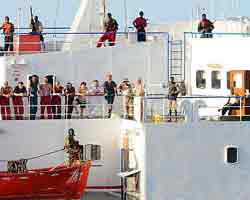 Somali pirates are the terror of ship captains navigating the Gulf of Aden, but could they soon become the unwitting facilitators of President-elect Barack Obama’s campaign pledge to engage with Iran? Some security and foreign affairs experts now think so, speculating that the pirates’ recent seizure of an Iranian-chartered cargo vessel might encourage Tehran to take part in anti-piracy operations off the coast of Somalia. The move would require at least some minimal level of coordination between Iranian warships and the international naval forces already patrolling the region, including the US Navy, and could potentially open the door to a more substantial rapprochement between the two long-estranged nations.

The Delight, a Hong Kong-flagged ship operated by the Islamic Republic of Iran Shipping Lines, was carrying nearly 40,000 tons of wheat and a crew of 25 when pirates stormed aboard on November 18. The ship is among at least 17 captured vessels now anchored off the Somali coast, including a Ukrainian freighter loaded with 33 Russian-made battle tanks and a Saudi supertanker carrying $100 million worth of crude oil. Some 250 crew members have also been taken captive. Still more hijacked ships have already been ransomed off, raking in an estimated $25 to $30 million for Somalia’s pirate gangs this year alone, according to the United Nations.

Tehran is negotiating for the release of the Delight, but this week made clear that military action remains a possibility if talks should fail. “Iran’s view is that such issues should be confronted strongly,” warned Ali Teheri, Iran’s deputy transportation minister. “The Islamic Republic of Iran has the capability to confront pirates. If necessary, we can use force.” Should Iran choose to dispatch its naval forces to the region, they would find themselves operating in close proximity to Combined Task Force 150, an international naval force that operates in coordination with the US Navy’s 5th Fleet and includes ships from the United Kingdom, Canada, France, Germany, Denmark, and Pakistan. Also looking out for their interests in the region are warships from Russia, Italy, Spain, India, Malaysia, and Turkey—all operating under a UN Security Council resolution, passed unanimously in June, allowing these vessels to enter Somalia’s territorial waters and to use “all necessary means to identify, deter, prevent and repress acts of piracy and armed robbery.”

As the size of this international naval flotilla continues to grow (like Iran, Saudi Arabia is also weighing its military options), some level of coordination will be unavoidable, says James Spencer, head of research and analysis for London-based Arlington Associates, a defense and security firm focusing on the Middle East and Africa. The various national fleets “will need to start talking to the others. ‘How are you going to get fuel? What fuel do you use? What size pipes do you have to replenish [fuel] at sea?’ All that sort of stuff. It’s really low-level, nitty-gritty logistics.”

But low-level engagement, especially early on in his administration, may be exactly what Obama has in mind. “I don’t see Obama rushing into a whole new relationship and embracing Iran,” says Gary Sick, an Iran expert and professor of international affairs at Columbia University. “But if you were putting together a list of things that you might do to try to change the tone of the relationship, this might be one of them.” And if Tehran does send ships to the Somali coast, “it wouldn’t make any sense unless they agreed to operate in some form of coordination with the other forces that are there.”

This might be easier than it seems. Unlike the Revolutionary Guard speedboats that periodically harass US ships operating in the Strait of Hormuz, Iran’s regular navy enjoys a reputation for competence and professionalism. “They may not like the Americans or the Brits or any other people they bump into in the Persian Gulf, but they’ve been perfectly civil,” says Spencer. “It would be possible for them to operate alongside various other [naval forces] with adequate politeness.” Moreover, in cases of shared national interest, Iran has already demonstrated its willingness to cooperate with the United States, even if the Bush administration has been largely unreceptive. “The United States and Iran have overlapping and sometimes mutual interests in the Gulf and in the region,” says Sick, citing increased stability in Afghanistan and support for Nouri al-Maliki’s government in Baghdad as examples. “It’s a shame we haven’t been working together on some of those issues.” When it comes to safeguarding commercial shipping through the Gulf of Aden, however, the shared interests are even clearer. Says Spencer, “Because it’s of mutual benefit, and it is a professional relationship [between navies] rather than a political relationship, there may be potential if both sides are prepared to make the approaches.”

Whatever the potential for engagement between the US and Iranian navies off the Somali coast might be, it’s unlikely to have much effect on piracy, says Spencer. “The real way you’ll stamp out piracy is by giving people better jobs, better ways to make money. The economic incentive is so much that, short of getting law and order back onshore, we’re not going to be able to stop it.” Nevertheless, if in the process of fighting Somali pirates Washington and Tehran can learn to play nicely together, perhaps it will have been worth it.