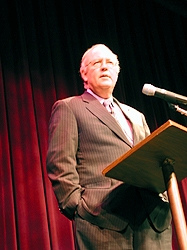 Overheard last week in DC at a right-wing legal convention: “We’ve all but confirmed that Ken Starr is going to take the case.”–Jordan Lorence, senior counsel, Alliance Defense Fund.

The involvement of the former Clinton special prosecutor in efforts to preserve California’s new ban on gay marriage really wouldn’t come as much of a surprise. Two years ago, Starr, now dean of the Pepperdine law school, represented a bunch of anti-gay marriage groups, including the Mormon Church, in amicus briefs in some of California’s gay marriage litigation. He’s been involved in the issue for a while, now. Given the intense interest in other people’s sex lives that Starr demonstrated during his investigation of the Lewinsky scandal, he seems a perfect fit for the job.

Of course, when I asked him at the Federalist Society conference to confirm the gossip, he said with a laugh, “No comment.” Later, I asked Lorence whether he had indeed confirmed Starr as counsel. Looking a bit shocked that he’d been caught blabbing out of school, he pleaded ignorance, suggesting that he had no intelligence on the matter whatsoever, despite his earlier boasts to a Harvard law student about his inside line to Starr. He did confirm that he would not be doing the arguing himself, nor would another lawyer from the alliance who has argued such cases before. I take all this to mean that Starr is likely to take the case.