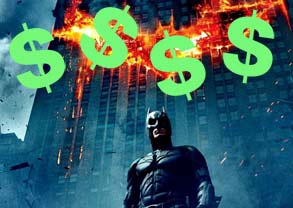 Box Office Mojo’s chart of the past 365 days at the box office has a couple surprises, and none of them are reassuring about our nation’s taste in movies. While even a cave-dweller would know that The Dark Knight snagged the most of our hard-earned cash in its batty claws this year, I bet you can’t guess the #2 movie, or tell me what three (or four?) kiddie flicks giggled their computer-generated, disturbingly-anthropomorphic ways into the Top 10. It’s all pretty depressing, to be honest, so take a deep breath and click “continues” to find out.

That’s right, Iron Man was #2, just barely beating out Indiana Jones, although over $200 million separates the Batman from the rest of the, er, flock. I guess we should just be glad Beverly Hills Chihuahua didn’t make it on the list.

While there’s a week left in 2008, it looks like their Top 10 will probably stay the same, since numbers 11 and 12 are Sex and the City and Mamma Mia!, respectively, and neither seem likely to experience a huge post-Christmas surge. However, with only about five million bucks separating WALL-E from Hancock, there’s a fighting chance the best movie on that list could overtake the, er, 6th-worst, in the next 7 days. Get out there and spend money on WALL-E, people!