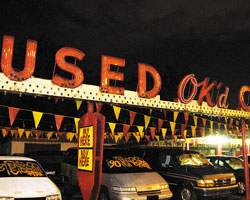 If the federal government bails out the Big Three, who’s going to buy their cars? Like those homeowners around the country who have found they owe more money than their homes are worth, millions of Americans are similarly underwater on their car loans. That debt burden will make it virtually impossible for millions of potential consumers to buy a car for years to come. This factor will severely blunt any good that a cash infusion might do for Detroit. For this, the auto industry has no one to blame but itself.

According to industry analyst Art Spinella, president of CNW Research, fully 85 percent of Americans with a car loan have negative equity. Other studies show that these loan holders, on average, owe $4,400 more than their cars are worth. Millions of Americans didn’t get upside down on their car loans without a lot of help. Enter the great scourge of the American consumer market: the car dealer. Car dealers have been out in force in recent days lobbying Congress and holding rallies at dealerships around the country to generate support for the rescue plan. As a result, there’s been a fair amount of sepia-toned media coverage about the desperate plight of the poor, local car dealer, that pillar of the community who supplies softball teams with T-shirts. And it’s true. These folks are now threatened right along with the Detroit assembly-line workers. The National Association of Auto Dealers predicts that 900 dealerships will fail over the next year.

Lost in all the news coverage is the fact that many car dealers played a central role in creating the current mess. As franchisees of the manufacturers, car dealers don’t make much money actually selling cars. The markups are pretty slim, and in recent years, Detroit has squeezed their dealerships for more and more profits. In the old days, car dealers would come up with creative ways to compensate for the small margins, such as rolling back odometers to sell cars for more than they were worth. But after Congress cracked down on the practice, dealers (and manufacturers, too) found a better way to pump up their bottom lines: selling financing.

Back in 2003, Forbes magazine observed that GM was better described as a bank that happens to make cars than as an automaker. At the time, as much as 90 percent of the company’s profits came from its lending arm (which also had a mortgage branch), not from car sales. For the past decade, much of Detroit’s output has been little more than a vehicle for selling credit, and the dealers have done the dirty work for them the way local mortgage brokers generated large volumes of questionable loans for big banks and finance firms.

Here’s how it works: When a customer comes into a dealership to buy a car, he already knows how much the car should cost (thanks to the Internet), but he usually relies on the dealership to arrange the financing, often because they advertise lower rates than banks. That’s when the scam starts. Many car dealers routinely load up car loans with all sorts of expensive but useless add-ons. These include such things as “theft etch,” when a dealer will spend $37 to etch the VIN number of the car onto the windshield, tout it as an “antitheft measure,” and charge the customer upward of $2,000 for it. Unbeknownst to most car buyers, dealers also routinely—and legally—bump up the interest rate offered by the bank or finance company in exchange for kickbacks from the lenders, which are often the manufacturers themselves. And in many cases, dealers encourage customers to trade in a car that isn’t worth the amount of their current loan by offering to roll the old loan into the new one, thus inflating the principal and making the loan more lucrative for the lender. That’s how people can end up owing $40,000 on a Ford Focus. This only works because auto lenders now stretch out the terms to six or seven years to make the payments affordable, a practice that virtually ensures that many cars won’t last as long as the loan. (In the 1980s, by contrast, Spinella says the average car loan lasted only three years and required a 20 percent down payment, which limited the kind of negative equity problem seen today.)

These are not aberrant practices. They are endemic to the industry. Earlier this month, the FBI raided two California dealerships accused of defrauding a local credit union by falsifying loan documents. And in September, Bill Heard, the country’s biggest Chevy dealership group, a $2.1 billion operation with dozens of outlets all across the South, shut down after GMAC cut off its financing stream. The state of Georgia had sued the company, alleging that Heard dealerships had lied to lenders about their customers’ income on loan applications, forged signatures on loan agreements, and packed car loans with all the usual junk. The state’s consumer affairs office had been investigating the company since 2003, and had sued it before over deceptive advertising practices. Consumer watchdogs suspect that Heard’s legal trouble lies at the root of GMAC’s decision to stop funding the dealerships.

Loan fraud is so widespread in the auto industry that even dealerships owned by a US congressman have been accused of engaging in it. Before coming to Congress, Rep. Vern Buchanan (R-Fla.) was one of the biggest car dealers in his state. (He has recently started selling off some of his dealerships.) This summer, he was hit with multiple lawsuits filed by former employees alleging that his dealerships routinely engaged in auto fraud, including submitting fraudulent loan applications to lenders.

The driving force behind all of these loan shenanigans is Wall Street. The automakers’ finance arms (and banks, too) have made a fortune by packaging the inflated loans made by their dealerships and selling them as securities. It’s the same scheme that ultimately brought down the subprime mortgage industry. And just like the mortgage lenders, the automakers and their finance arms must have been well aware that the loans generated by their own dealers were frequently bad ones. That’s because consumer lawyers have been successfully suing them over this for years.

Tom Domonoske is a lawyer in Virginia who specializes in auto fraud cases. He says he’s had dozens of cases where car dealers have created fictitious tax returns, pay stubs, and other paperwork to push through loans for people who couldn’t afford them. But he says that even though the lender is frequently sued in these cases along with the car dealer, he’s never once seen an automaker’s lending arm cut off a dealership’s financing after discovering fraud. “They want dealers to keep moving their products,” he says. Rather than clean up the dealerships, the automakers simply started putting mandatory arbitration clauses in the loan documents so that customers who ended up getting screwed couldn’t sue.

Until now, the negative impact of car dealers’ sleazy credit practices mostly affected consumers. Meanwhile, it prevented GM and Chrysler from having to scale back production. The offers of longer loan terms and easy credit lured in customers who either had no business buying a car or couldn’t truly afford the cars sold to them. “They essentially postponed a reckoning,” says Joan Claybrook, the president of the nonprofit consumer group Public Citizen. Detroit automakers were warned years ago that these practices would come back to haunt them.

In 2004, major auto analysts noted that the lengthening loan terms and the increasing number of potential car buyers who were upside down on loans would lead to no good end for the auto industry, and GM in particular. Deutsche Bank analyst Rod Lache was prescient when he told Automotive News that the negative equity problem would only get worse if the automakers didn’t address it. Observing that the average amount of money owed by someone trading in a car with negative equity had jumped from $2,900 to $4,000 in just a five-month period, he wrote, “The impact on US demand, price and mix from this phenomenon could be devastating, particularly if the impact is compounded by rising rates.”

That’s exactly what is happening now, a problem exacerbated by the credit crunch that won’t be solved by simply giving the automakers taxpayer money. “Ultimately, no matter how much money Congress throws at the automakers, it’s car buyers who will rescue them or not,” says Rosemary Shahan, head of Consumers for Auto Reliability and Safety. Just as environmentalists have seen the bailout as an opportunity to change the way American companies make cars, it also offers a unique chance to change the way they sell cars. Shahan and other consumer groups have come up with a short list of things that Congress might do in this regard.

For instance, Congress could cap the amount that car dealers can increase interest rates on auto loans, as California has done. This would be a major step in limiting the growth of negative equity. Lawmakers could also create a restitution fund to help car buyers affected by dealership bankruptcy. This problem is growing as more dealerships go out of business and fail to pay off the original loans of customers who traded in old cars and purchased new ones.

Congress could also roll back a provision auto lenders won in the 2005 bankruptcy reform bill requiring individuals who file bankruptcy to repay the entirety of a car loan, even if they owed substantially more than their car was worth. Previously, someone in bankruptcy would only be required to pay back the loan up to the actual value of the car. Returning to the old system would allow more people to get out from under their debt—some of which was created through dealer fraud—and allow them to eventually rejoin the car market.

Unfortunately, none of these measures is even on the table, says Shahan, who was recently in Washington trying to inject the consumer angle into the bailout debate. Failing to provide meaningful relief to homeowners facing foreclosure has turned the banking bailout into something of a flop. Laura MacCleery, a lawyer who spent many years working on auto issues at Public Citizen before going to work for the Brennan Center for Justice, says she’s amazed that Congress hasn’t learned anything from the mortgage mess. “Are they going to make the same mistake twice?” she asks. The auto industry may be hoping the answer is “yes.”

Photo by flickr user the toe stubber used under a Creative Commons license.