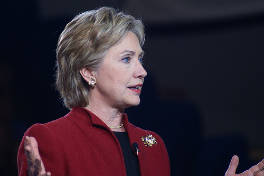 It was a foregone conclusion that Secretary of State aspirant Hillary Clinton would sail through her confirmation hearing on Tuesday morning. The Senate Foreign Relations Committee is a club, and whatever their disagreements, it’s members love to see their own rise to the top. (President-elect Obama and Vice President-elect Joe Biden were also Committee members.)

The hearing was a classic game of political softball, in which Clinton’s examiners gushed over her wonderful achievements and wished her well. Many used the occasion to win television time for their own pet projects: Indiana Republican Richard Lugar talked about nonproliferation; Alaska Republican Lisa Murkowski urged action on the Law of the Sea Treaty; California Democrat Barbara Boxer discussed women’s rights; and many others—including Massachusetts Democrat, former presidential nominee, and disappointed Secretary of State hopeful John Kerry—brought up the issue of Israel’s ongoing war against Hamas in the Gaza Strip. Surprisingly, there was almost no mention during the morning’s opening round of questioning about former President Bill Clinton’s Global Initiative and the potential conflicts of interest inherent in his wife’s ascendance to the country’s top foreign policy post; the organization relies, in part, on funding from international donors. Florida Democrat Bill Nelson, among the relative few to even mention the Global Initiative, suggested that rather than complicating Clinton’s nomination, it illustrates her and her husband’s deep engagement in the world. (Yes, but as AP reports today, there is evidence of Senator Clinton intervening at least six times during her years on Capitol Hill on issues directly affecting firms that later donated to her husband’s foundation.)

Equally surprising was the lack of serious questioning on perhaps the greatest foreign policy challenge facing the new administration: Afghanistan. With US troops in Iraq preparing to pull back to their bases by June and depart the country entirely by the middle of next year, the big question now is how many will be dispatched to Afghanistan to battle emboldened Taliban and Al Qaeda forces. For his part, Obama has said relatively little on the subject in recent weeks, noting only that things are not going well and that “we’ve got to ramp up our approach.” Thus far, this would seem to involve the deployment of 30,000 more troops, $1.3 billion in additional military infrastructure projects in Afghanistan (bases, barracks, warehouses, training fields, airfields, etc.), and, perhaps, an additional $2.5 billion in supplemental funding to the State Department in support of international development projects. The Washington Post describes the Obama administration’s stance on the latter as “noncommittal.”

Beyond this, the overarching theme of the Obama team’s foreign policy approach is to employ what has come to be called “smart power“—essentially a full-court press using all tools at the government’s disposal: diplomatic, economic, and yes, military. In her opening statement on Tuesday, Clinton described her commitment to “forward, direct diplomacy in every part of the world,” adding that she believes that “foreign policy must be based on a marriage of principles and pragmatism, not rigid ideology.” She outlined her “pragmatism” vis-à-vis Afghanistan by expressing support for “a comprehensive plan using all elements of national power—diplomacy, development, and defense—to work with those in Afghanistan and Pakistan who want to root out Al Qaeda, the Taliban, and other violent extremists who threaten them as well as us in what President-elect Obama has called the central front in the fight against terrorism.”

Clinton’s (and, by extension, Obama’s) enthusiasm for a multi-pronged approach is less a choice than a simple recognition that, given the Taliban’s rapid resurgence, Afghanistan cannot be secured by force of arms. Literally. We simply don’t have the troops. Exhausted by years of combat in Iraq, the bulk of the US military is under extreme stress. The idea of launching into another sustained period of fighting against increasingly smart and well-equipped hit-and-run insurgents is far from appealing. The Army’s new counterinsurgency manual, written by military prodigy John Nagl, suggests that a successful counterinsurgency requires a military-to-civilian ratio of at least 1-to-50. In Afghanistan, this would require a force of 600,000 troops—an impossibility given the current size and disposition of US forces, not to mention the continued reluctance of NATO partners to commit to large-scale combat deployments. Roughly 31,000 US troops are currently deployed in Afghanistan.

It’s for this reason, perhaps, that the Pentagon has expressed enthusiasm for a strengthened State Department role in the field. According to Tuesday’s New York Times, Admiral Mike Mullen, chairman of the Joint Chiefs of Staff, is even advocating that “more money and personnel be devoted to civilian agencies responsible for diplomacy and economic development.” Have you ever heard of the military suggesting cuts to its own budget?! The move appears to signal a decisive break with the Rumsfeld-era vision of an all-powerful Pentagon. “I believe we should be more willing to break this cycle, and say when armed forces may not always be the best choice to take the lead,” Mullen said. Wow. (It’s worth noting that Mullen will be staying on the for time being and that his boss, Defense Secretary Robert Gates, will also retain a seat at Obama’s table.)

So, with the emergence of Clinton’s “smart power” approach and the military’s apparent aquiesence to a new way of doing business, what if it’s not enough? What if it doesn’t work?

Clinton’s self-professed pragmatism may place her in the uncomfortable position of compromising on one of her longest and most deeply held passions: the well-being of women and girls around the world. At this morning’s hearing, Senator Feinstein used her question time to push Clinton to be true to her commitments to safeguarding women’s rights. She went so far as to display photographs of Afghan schoolgirls disfigured with battery acid by members of the Taliban. Clinton responded that preventing such attacks is not only an issue of human rights, but of national security. But, as seems increasingly likely, if US involvement in Afghanistan can only be drawn down by cooperating with elements of the Taliban (similar to what happened with Iraq’s Sunni Awakening), Clinton may be forced to do business with some very sketchy characters. Will her pragmatism stretch that far?

At the hearings, Clinton, though paying lip service to pragmatism in general, gave no hints of how far she is willing to apply it in Afghanistan. In fact, she yielded few details about the approach she expects to take—and the senators on the committee did not press her on this front. It’s true that Afghanistan was not intended to be the hearing’s main issue. Soon, though, she and her boss will have to make some hard decisions on the subject. Yet in this first outing in her new role, she provided no clear road map of where they might be heading.

Photo used under a Creative Commons license from marcn.