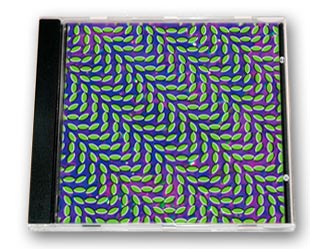 Animal Collective is nothing if not honest: they’re a loosely-defined collaboration between a couple musicians of Baltimore heritage that includes at least one nominal critter, Panda Bear. Between 2000 and 2008, the combo produced eight albums of sometimes noisy, sometimes delicate music, stepping easily over the boundaries of genre as if they were painted in a lower dimension. Their Wikipedia page lists their musical style as “Experimental/Noise pop/Freak folk/Indie rock/Neo-psychedelia,” just to cover all the bases, but their sprawling output has been unified by a dedication to pure, pleasurable melody, a world view, shared by many, that puts The Beach Boys’ Pet Sounds at the center of the universe.

With that kind of pedigree, it’s understandable that Animal Collective have always been critical darlings, but their just-released ninth album, the more electronic-based Merriweather Post Pavillion, is getting some of the best reviews of their career. Pitchfork gave it a 9.6/10, describing the album as the culmination of the band’s musical searchings, “a new kind of electronic pop.” Entertainment Weekly called it “joyful, pure, and best of all, totally inclusive,” Drowned in Sound gets all James Joyce-y, burbling about “the rush of life, the rush of electricity, the rush of joy, joy unbounded,” and Uncut actually said “it feels like one of the landmark American albums of the century so far.” If these critics don’t look back from December and change their minds, Pavillion will be 2009’s album of the year. So, is it really, or did the album’s eye-straining cover art (the product of Japanese psychologist Akiyoshi Kitaoka) just hypnotize everybody?

While I did spend a fair amount of time staring at the cover art (it moves!), I still feel in enough control of my faculties to say that Pavillion will be hard to beat. It’s an album of sparkling keyboards and buzzing synths, quirky syncopated rhythms and almost danceable stomps, all of it a surprisingly natural fit with their high, clear vocals. Six of the eleven tracks soar past the five minute mark, but they still feel rich and compact, as if this eternally shifting, joyful noise could go on forever. “My Girls” is currently the band’s biggest download on iTunes, and it’s gorgeous, hymn-like. Synth arpeggios (seemingly cribbed from the 90s remix of Candi Stanton’s “You Got the Love”) tinkle in triple time, as the lyrics recite an incantation of a father’s love for his wife and daughter, and his simplest, plainest desire: to provide them with shelter, “four walls.” The lyrics begin to wind around each other like a round of “Row Your Boat,” with structure added by a celebratory dance beat and hand claps (dare I say, Bmore-style?), turning the hymn into a party. It’s glorious, heartrending, and ends far too soon at the 5:41 mark. And that, Riffers, is just track two.