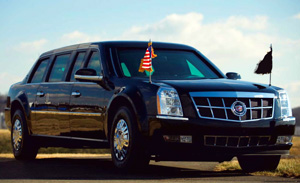 Back when he was a mere senator, Barack Obama declared that “When it becomes possible in the coming years, we should make sure that every government car is a plug-in hybrid.” Now that he’s leader of the free world, he’s rolling a bit differently. The new presidential limo, which entered service this morning, is a fuel-sucking monster. The Cadillac, nicknamed “the Beast,” is so loaded with armor and security features that it takes a medium-duty truck chassis to lug it all. And despite stories like this, it is most definitely not a hybrid. Its diesel engine gets somewhere between 5 and 10 mpg. Ouch.

So is Obama breaking his pledge to spend taxpayer money on hybrids whenever possible? There aren’t any plug-in hybrid limos out there, but there are regular hybrid ones, though none as heavy as the Beast. But heavy doesn’t rule out going hybrid. Peterbilt makes a hybrid medium-duty truck, and Treehugger notes that Obama once earmarked money to make hybrid Hummers. To be fair, the new presidential limo was probably on the drawing board way before Obama was elected. Yet it’s not too early for the president to start leaning on the recently bailed-out General Motors to get working on the next generation of fuel-efficient presidential bunkers on wheels.

Not all energy-efficiency geeks are upset that Obama’s carbon tireprint is getting even bigger. One poster on the message boards over at CleanMPG, the hypermiler hangout, is willing to cut the guzzler-in-chief some slack: “There are only two good reasons for personal FSP’s. The Military and the President.” In hypermiler lingo, FSP means fuel sucking pig. Still, a plug-in hybrid with 8-inch armor would still set a pretty cool example for those of us with less demanding security specs.