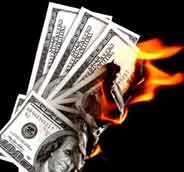 The House Oversight Committee released a report this morning identifying nearly 14,000 recommendations made by agency Inspectors General since 2001 that have yet to be acted upon by the Bush administration. In addition to simply improving health, safety, and security conditions, the committee claims that implementing some of these fixes could save taxpayers an estimated $25.9 billion. It’s a big number, but more interesting to me were some of the IG recommendations that have languished. Along with examples of run-of-the-mill government waste—e.g., “FEMA could recover $16 million in excessive billings and questionable costs resulting from poor management of a contract”—there are a few doozies.

In May 2003, the IG for the Nuclear Regulatory Commission issued a report concluding
that the Commission’s limited oversight does not provide adequate assurance that all
licensees properly control and account for special nuclear material, such as plutonium
and uranium.16 In a December 2008 memorandum to NRC management, the IG raised
concerns about “continued delays” in promulgating rules to address these security
concerns. NRC estimates it may not complete the rulemaking until July 2011, eight years after the report’s release.

In June 2005, the Department of Homeland Security IG found that U.S. Customs and
Border Protection does not consistently enforce federal export controls over chemical and biological commodities at U.S. ports of exit. The IG recommended that the agency
evaluate its export controls program, including current resources and staffing needs, and make adjustments necessary to accomplish its enforcement responsibilities.20 According to the IG, corrective actions will not be completed until 2012, seven years after the report’s release.

In May 2007, the Department of the Interior IG visited 13 schools run by the Bureau of
Indian Affairs and found severe structural problems with the potential to injure or kill
students and faculty, including crumbling walls and outdated electrical systems.29
Although the agency’s management concurred with the IG’s recommendations, it has not produced a plan to identify and mitigate health and safety hazards or target dates for accomplishing specific steps.

Can someone get on this one before we inadvertently unleash a superbug?

In December 2005, the Department of Agriculture IG released a report finding that the
Animal and Plant Health Inspection Service needs a formal process to monitor and
control field releases of genetically engineered organisms. Three years after this
report’s release, the department still has not implemented 17 recommendations to
strengthen monitoring of genetically engineered crops planted in the open environment.

Read the rest of the report [PDF] here.