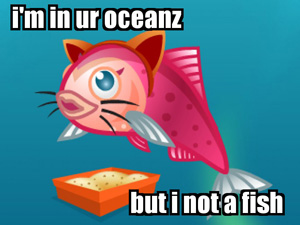 Does this count as Friday cat blogging? Your answer to that question will reveal just how kooky or clever you think PETA’s new “Save the Sea Kittens” campaign is. What is a sea kitten, you ask? It’s the animal-rights group’s cuddly new name for what is commonly known as fish. According to PETA, fish have an image problem: They’re scaly, slimy, and, uh, fishy. (And they don’t blink. Creepy.) “Who could possibly want to put a hook through a sea kitten?” asks PETA. We’ve done lots of serious reporting on overfishing and other threats to the animal formerly known as fish, but it’s hard to imagine anyone taking those issues more seriously if we’d talked about the plight of the sea kitten. And besides, humans kill lots of animals even though they’re cute (baby seals) or feline (tigers). Fish don’t have a PR problem, they have an edibility problem. So I propose only using the term sea kitten only for ridiculous seafood news. Like, say, actors claiming to have gotten mercury poisoning from eating too much raw sea kitten.