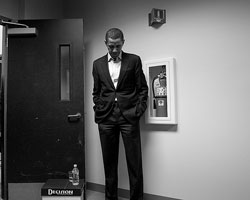 Right now, the new era of bipartisanship in Washington is unilateral.

The massive stimulus package passed the House yesterday with zero Republican votes. Obama, who had hoped for a widely supported bill, got stonewalled despite doing three things: (1) fashioning roughly 1/3 of the package out of tax cuts, which the GOP loves; (2) going to the House Republican caucus and asking for their input; and (3) pulling provisions from the bill that Republicans didn’t like (see previous post). House Republicans acknowledged all of this, thanked the President, talked smack about the House Democrats, and voted against the bill anyway.

So what does Obama do now?

(1) Take stock. He certainly isn’t going to stop reaching out to Republicans — to ditch the central premise of his campaign after one negative experience would be preposterous. But he can acknowledge that the output is the same. If he doesn’t reach out to the Republicans, he will get slammed for being partisan and get zero votes for his priorities. If he does reach out to Republicans, he will get thanked for his efforts and get zero votes for his priorities (as we’ve seen). Either way, Republicans remain an unhelpful, recalcitrant bunch.

(2) Lowball. Next time, instead of reaching out to Republicans with a serious attempt to include their priorities (30 percent of the stimulus in tax cuts), Obama should start lower (10 percent?) and negotiate up. His bipartisan credentials will only be burnished by the fact that he went through the process of wrangling with the opposition and adding pieces it supports bit by bit.

(3) Stand strong when necessary. Obama should be less willing to ditch important provisions that Republicans oppose. They’ll oppose the final bill regardless. And remember that there are the members of the Democratic caucus that need to be greased, too. MSNBC’s First Read wrote today, “We’ve been hearing chatter from congressional Democrats that they’d like the president to act as concerned about winning their support as he acts when it comes to the Republicans.” If Obama cuts too many progressive priorities from a major bill because the Republicans demand it, he will have an even bigger mess to deal with.

(4) Finally, play the PR game. Did Big O forget that he’s the guy with the soaring popularity recently elected with a mandate for change? And that Republicans, who have a popularity rating under 30 percent if polling is to be believed, got their tails kicked in November? Make some hay out of this situation in the media. Obama should take to the microphones and explain exactly how far backward he bent over to make this bill one that everyone could get behind. Make the Republicans look bad. Make them think twice about unified opposition next time. So what if it turns into a war of the words — who is the public going to sympathize with, Obama or John Boehner? (Especially considering the public is strongly behind massive stimulus.) Obama doesn’t have to create bipartisanship by kowtowing to GOP demands. He can create bipartisanship by making people terrified of opposing him.