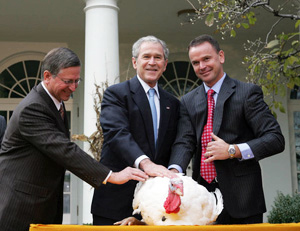 If there was a sure bet about George W. Bush’s final moments in office, last-minute pardons seemed like they were it. Intrade once had the likelihood of a pardon for Scooter Libby at 93%; Frank Rich said a Libby pardon was a “slam dunk.” Mother Jones even got into the action: In our current issue, Jonathan Schwarz explores the history of preemptive presidential pardons and speculates about a blanket pardon that would have covered everyone from Dick Cheney and David Addington down to the guys who actually did the waterboarding. (For a list of all the journalists and pundits who predicted pardons, this site has been collecting examples.) But now (barring some kind of shady shenanigans in his last nanoseconds) it appears that Bush hopped on Marine One without leaving behind Get Out of Jail cards for anyone but two former Border Patrol agents doing time for shooting a drug dealer. So what happened? Did Bush just leave his subordinates out to dry? Did he recognize pardons as an admission of guilt? Or was he just calling Democrats’ bluff, daring them to investigate or prosecute actions that they’d signed off on back before the political winds changed? Or, as a final gesture as self-styled Beltway outsider, did he decide not to play the midnight pardon game? Probably a bit of all those. I’ll be curious to hear from legal experts if Bush just left an opening for the kind of legal reckoning and accountability that went AWOL during the past eight years. Meanwhile, count me in the ranks of those who didn’t expect the Decider to forgo this final perk of executive power.

Image of Bush pardoning a turkey from Wikimedia Commons