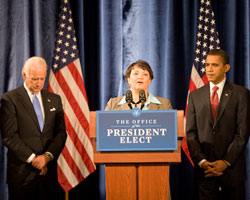 Only a few of Obama’s cabinet nominations have received any criticism during this transition period; most have been fuss-free. But Lisa Jackson, commissioner of the New Jersey Department of Environmental Protection since 2006 and Obama’s pick to head the enervated Environmental Protection Agency, has been slammed by an environmental nonprofit called Public Employees for Environmental Responsibility (PEER) that has blasted her in the toughest terms, calling her incompetent, weak, and unaccomplished.

Other environmental groups are cheering Jackson as she heads to the Senate for a confirmation hearing on Wednesday. But PEER has produced pages and pages of research (PDFs available here) that it claims serve as an indictment of her 31-month tenure as the Garden State’s top environmental officer. The organization points out that in 2006 Jackson said publicly that “developing a new ranking system to prioritize” polluted sites due for cleanup was “the most important thing” her department was working on. Without a ranking system for the state’s more than 15,000 contaminated sites — the longest such list in the nation — her department could not identify New Jersey’s most dire pollution problems. But, PEER complains, Jackson never delivered a ranking system and then proposed to outsource clean-up responsibilities to private contractors. Jeff Ruch, the executive director of PEER, says, “She never developed a coherent plan. This was supposed to be her specialty, because the time she had spent previously at the EPA was spent on toxic cleanup. But she never displayed any expertise in a way that was helpful.”

This is but one example. Jackson comes under fire from PEER for a variety of other reasons: letting Superfund clean-ups go unfinished (a common New Jersey problem that predates Jackson); waiting three months to inform parents and workers that their Gloucester County day care was vulnerable to mercury vapors because it was built on the site of a former thermometer factory; mistreating a whistleblower; and creating flood hazard controls plagued by loopholes. PEER also alleges that under Jackson and New Jersey’s DEP weakened groundwater pollution protections and missed key deadlines for a climate change bill.

Ruch acknowledges that Jackson has had her successes and that she has a reputation of being accessible and personable. In total, Ruch paints a picture of a conventional state-level bureaucrat with a record of both wins and losses, whose primary sin is not leaning more on her boss, Governor Jon Corzine, a Democrat whose weak environmental instincts may lay at the root of many of Jackson’s alleged failings. Ruch describes a pattern in which Jackson repeatedly staked out a strong initial position on an environmental issue but ultimately unveiled a weak legislative or statutory proposal, because of pressure from the governor, industry, or someone else. “This is example of what we’ve seen out of Bush’s EPA,” says Ruch. “They take staff decisions to the White House, they get reversed, and then they pretend it was their decision. That’s exactly the sort of thing we were seeing in New Jersey.” He worries that Obama picked Jackson precisely because she is willing to be compliant, and will let the White House, not the EPA, make environmental policy.

But when it comes to Jackson’s nomination, PEER is in the minority in the green community. Most environmental groups support Jackson. Frances Beinecke, president of the Natural Resources Defense Council, has said Jackson is “an excellent choice as the next administrator of the EPA” and that she has been a “strong advocate for the enforcement of environmental laws.” The Sierra Club also applauds the pick. Its executive director, Carl Pope, said the organization has a “very close, very positive relationship” with Jackson and that “she brings a strong scientific background to an agency where for the past eight years science and knowledge have been systematically corrupted and disregarded.”

Jeff Tittel, the director of New Jersey’s chapter of the Sierra Club, disputes PEER’s charges. “You have to understand that Jackson started out with a department that’s had trouble for a long time,” he says. He points to past Republican governors of New Jersey, who depleted the DEP, and the current Democratic governor, Corzine, who “isn’t exactly pro-environment.” He cites Jackson’s victories on keeping state parks open, on protecting open space, and on important sewer and septic regulations. He praises her leadership on the state climate change bill, which was stronger than the governor originally wanted. “She’s made the best of a bad situation,” he says.

Tittel doesn’t deny that Jackson’s record is imperfect. “In some areas things have gotten cleaner, in some areas things have gotten dirtier,” he says. But he emphasizes that New Jersey is, on balance, better off for Jackson’s leadership. He attributes PEER’s gripes to a few sources in New Jersey who “have their own set of problems, and issues, and grudges.” And PEER’s Ruch fires back by calling Tittel’s support of Jackson “self-serving.” “There’s a question of whether they did their job,” he says of New Jersey environmental groups like Tittel’s. “They stood by while a lot of this happened.”

Despite PEER’s gripes, Jackson is expected to have no trouble at her Senate confirmation hearing. Environmentalists in Washington are looking to her to revitalize the EPA after the agency’s embarrassing eight years under Bush and Cheney. If she disappoints them, no doubt PEER will be ready with a quick “We told you so.”