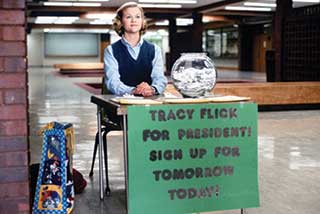 
You may be a liberal if…you were the Tracy Flick of your nursery school. Confident, dominating preschoolers grow into liberals, while fearful and easily victimized tots turn conservative.

You may be a conservative if…you alphabetize your underwear drawer. Conservatives are more likely to have neat and tidy rooms, and liberals messy ones.

You may be a liberal if…you’re up all night. 28% of liberals have insomnia, compared with 16% of conservatives.

You may be a conservative if…you’re a woman who craves chocolate chip cookies. Liberal ladies prefer theirs fruit filled.

You may be a liberal if…you’re in the mood for Chocolate Peanut Butter Cookie-Dough Cheesecake. Liberals’ chain eateries of choice are the Cheesecake Factory, Panera Bread, and Starbucks, while conservatives dine at Hardee’s and Fuddruckers.

You may be a conservative if…you’re happy with tap water. Domino’s Pizza claims Republican customers are less likely to order beverages.

You may be a liberal if…you’re too lazy to walk to the pizza place. The Domino’s survey found that Democrats rely on delivery more than Republicans.