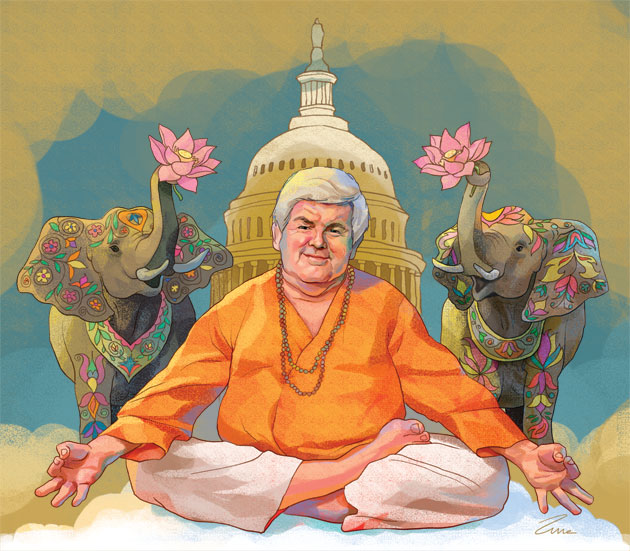 Who’s the big Republican winner emerging from the gop‘s decisive defeat in November? It’s not Sarah Palin (future as a presidential contender highly doubtful), Mitt Romney (now a political nonentity), or the party’s point men in Congress (smaller, weaker caucuses). Amid the wreckage, the guy standing tallest in gop-land is a fallen powerbroker whom some had written off as a has-been: Newt Gingrich. Yes, the silver-haired conservative whom liberals loved to hate—the bomb-throwing backbencher whose Contract With America helped him gain a Republican majority and the House speakership in 1994—is back as a (if not the) Grand Old Man of the party. “Newt,” says his former aide Rich Galen, “is the Republican intellect in chief.”

During the 2008 campaign, Gingrich and an organization he founded, American Solutions for Winning the Future, put into play perhaps the year’s only winning policy issue for Republicans: “Drill Here, Drill Now” (which became the McCain/Palin mantra “Drill, Baby, Drill”). And in the months of quiet desperation following the election, he has once again become one of the most quoted Republicans in Washington. Conservative columnist Robert Novak dubbed Gingrich the “Moses, or Reagan” who could lead the party out of the wilderness. “Newt has the unique ability to turn dense political thinking into what people can immediately understand—whether they agree with it or not,” says Galen, now a consultant and pundit.

After the election, Gingrich was mentioned as a possible candidate for party chairman. But he declared he was not interested—that instead he wanted to develop a “tri-partisan” approach to politics and policy that would unify Democrats, Republicans, and independents. Tri-partisan? It sounded as if Gingrich were ready for a round of “Kumbaya.”

To be sure, in the decade since abruptly leaving the House after bitter gop losses in the 1998 election, Gingrich has been creating something of a double identity. He’s been pushing reform projects that transcend his rep as a fierce partisan—for instance, working with Hillary Clinton on an initiative to computerize medical records—while simultaneously crafting policies that he believes can help the gop win. Most of all, the former history professor has burnished his reputation as an ideas man. He’s been showing up regularly as a Fox News talking head and has maintained a packed speaking schedule. And, of course, he gives good quote (though he refused to be interviewed for this story).

Gingrich can come up with 15 ideas a day, Galen notes, realizing that only one is any good and that “over the course of a month, maybe one of them is actionable and you can build a project on it. The biggest sin in Newt-world is the sin of inaction.”

Case in point: American Solutions. Its myriad projects include good-government initiatives, such as an effort to identify and connect all 513,000 elected officials in the United States so they can share best practices; its Solutions Academy features a video lecture by Elaine Kamarck, a one-time Al Gore aide, on how to modernize the federal bureaucracy. Last year, Gingrich sent American Solutions’ director of Internet strategy, David Kralik, to Silicon Valley to set up an office and start mining the tech world for ideas. “There’s an awful lot we can learn from the people who brought us Google,” Kralik says. Referring to the explosion of user-review sites, he asks, “What if we could Yelp the federal government or local dmvs?”

But not everything about American Solutions is so ecumenical. Its 10-point platform—developed with the help of national polling—includes several gop hot-button issues: making English the official language of government, introducing a version of the flat tax, and keeping “one nation under God” in the Pledge of Allegiance. The organization’s online Solutions Lab attracts user suggestions along the lines of “Stop the campaign from the pro global warming crowd” and “Force Bible teaching in your school district.” And in one of its less-well-timed initiatives, the group is pushing for financial deregulation—specifically, a repeal of the Sarbanes-Oxley law of 2002, which included a number of corporate and accounting reforms.

According to the Center for Public Integrity, right-wing casino mogul Sheldon Adelson has given American Solutions $4.6 million (more than a third of its total donations, as of last September), and Carl Lindner, chairman of the American Financial Group and big-time gop contributor, donated $650,000. Were these funders jazzed about Elaine Kamarck, or was it Drill Here, Drill Now (and the boost it gave McCain) that wowed them? Ellen Miller, cofounder of the Sunlight Foundation, points out that American Solutions is constituted as a 527 group, and the “only reason to have a 527 is to have a potential political springboard.” Gingrich did toy with a presidential run during the last campaign—but he never got serious. In 2012, he will be 69, three years younger than John McCain was when he accepted the nomination.

Whether or not Gingrich is running for anything, he’s never had trouble staying in the mix. During the congressional deliberations in September on the Wall Street bailout, he easily became an interloper. nbc News reported that he had privately egged on House Republicans to vote against it. He disavowed that, maintaining that he had been “trying to help it get through.” But in public statements, Gingrich sent mixed signals, calling for Treasury Secretary Hank Paulson to resign. He also railed against the Bush administration, huffing that it had “provided three case studies in arrogance, isolation, and destructiveness: Michael Brown during Hurricane Katrina, Ambassador Bremer in Baghdad, and Secretary Paulson at Treasury…No conservative and no Republican should doubt how much it has hurt our cause and our party.”

In the wake of the Obama victory, Gingrich has surfed the postpartisan wave. When the Republican National Committee released an ad attempting to link Obama to Illinois governor Rod Blagojevich, Gingrich pummeled it for engaging “in the sort of negative attack politics that the voters rejected in the 2006 and 2008 election cycles.” Shortly after that, when a candidate for the party’s chairmanship distributed a parody song called “Barack the Magic Negro,” Gingrich declared it was “racist” and “so inappropriate that it should disqualify any Republican National Committee candidate who would use it.

“Has the man whose political action committee once circulated a memo urging Republicans to call Democrats “sick,” “pathetic,” “corrupt,” “selfish,” “bizarre,” and “traitors” who “lie” and “betray” truly found another way? Not exactly. Commenting on protests against California’s anti-gay-marriage amendment Proposition 8, he told Bill O’Reilly, “There is a gay and secular fascism in this country that wants to impose its will on the rest of us.” And he and his third wife (the woman with whom he had an extramarital affair during the Clinton impeachment) recently produced a movie aiming to expose the “relentless effort” of the “secular Left” to “drive God out of America’s public square.”

So who is the real Newt—the Web-savvy wonk toiling to revitalize government, or the canny political strategist gathering ammo and identifying wedge issues for the gop? The answer, of course, is both—and neither Democrats nor Republicans ought to forget that Gingrich pulled off a political revolution once before. “Newt thinks on a grander scale than most of us,” Galen says. “And because the Republican Party is on its heels, anyone with grand ideas will be listened to.”