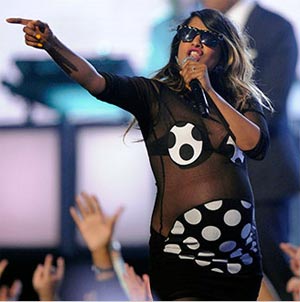 What a week. Singer M.I.A. has posted the news to her MySpace blog, as one does: she gave birth to a healthy baby boy on Wednesday, and he is apparently “the most amzing [sic] thing ever on this planet.” Apparently my little joke about her giving birth on the Grammys last Sunday night wasn’t far off, as the singer said in her own all-caps words:

SUNDAY NITE I CA M E HOME FROM THE GRAMMY’S STILL IN THE MOOD TO PARTY , I COUDA EASILY GONE OUT BUT I WENT HOME INSEAD , LUCKY I DID!! COZ MY EARLY STAGE LABOUR KICKED IN AROUND 2 AM.

Nothing like terrible lip-synching to induce labor. Anyway, they haven’t told us a name, but congratulations to M.I.A. and babydaddy (can I say that?) Ben Brewer Bronfman, frontman for NYC combo The Exit; hopefully this will take their minds off the weird article in Tuesday’s New York Times, which used the obligatory “some say” to accuse M.I.A. of being “an apologist for the separatist Tamil Tiger rebels fighting in the country’s long-running civil war.” The article didn’t really have any new reporting other than quotes alleging she supports “perhaps the most ruthless terrorist outfit in the world,” and the Times itself calling her opinions a bit out there:

M.I.A.’s claims that the government is carrying out a genocide against Tamils place her on the outer fringe of opinion about the conflict. Although the government has brutalized and killed Tamil civilians over the past 25 years, human rights organizations spread the blame around, estimating that 70,000 people on both sides have been killed in the fighting. … “Paper Planes,” which compares international drug dealing with selling records, drew a reaction from DeLon, a Sinhalese rapper based in Los Angeles, who made a video remix in which he interspersed images of people being blown up by Tamil Tiger bombs and subtitles about M.I.A. being a terrorist. M.I.A. responded that she did not support terrorism.

As I’ve said before, part of what makes M.I.A.’s music and political stance so compelling is that she approaches the mantle of “third world representative,” forced upon her by her background and skin color, with a punk-rock spirit and post-modern playfulness. One can take her perspective on the Sri Lankan situation seriously without taking the graphic design in her videos literally. What’s next, a story warning us that N.W.A. wants to fornicate with law enforcement officers?