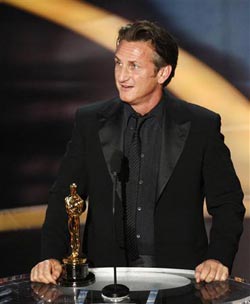 Despite the terrible odds given by America’s favorite statistician Nate Silver, Sean Penn snagged the Oscar for Best Actor over favorite Mickey Rourke at the Academy Awards Sunday night in Los Angeles. It was an astonishing upset, on an equal level with 2005 2006’s Best Picture shocker Crash over Brokeback Mountain, and it’s hard not to take the award as a bit of a comeuppance for the gays. Hooray gays! Penn gave a classy, heartfelt speech, ending with a plea for equal rights for gays and lesbians, but the most important part about Penn’s win seems to be the acknowledgment of what was truly the greater performance. While Rourke’s comeback was admirable, it was Penn who buried himself inside his character, elevating Gus Van Sant’s Milk above a faithful retelling of a great documentary into something special. Penn’s speech called the Academy “commie, homo-loving sons of guns,” which is pretty funny, considering Brokeback‘s loss, but when you think about it, the Academy really does like straights who play gay: Tom Hanks, Phillip Seymour Hoffman, Charlize Theron, Hillary Swank and William Hurt have all won Oscars for queer characters in the last 25 years. Hmm. One of these days, gays will win for playing straight! (Go ahead and insert Hugh Jackman joke here.)

In other Oscar news, Slumdog Millionaire dominated, as expected, with eight total awards including Best Picture, while The Curious Case of Benjamin Button won three of its thirteen nominations. The ceremony started off amusingly, with Jackman performing a cute song-and-dance number paying tribute to the nominees, but went downhill from there—using five previous actress and actor winners to present the current nominees was kind of creepy. One of us, one of us! In any event, one hopes that Slumdog‘s win might open some doors for Bollywood to gain a greater audience, but in reality, Slumdog has about as much to do with Bollywood as Crouching Tiger, Hidden Dragon had to do with Hong Kong cinema, so that might be a little far-fetched. Either way, I won the Oscar pool for the third year in a row (thanks, Sound Editing!), so I’m spending my ten bucks on a ticket to actually see one of the movies.