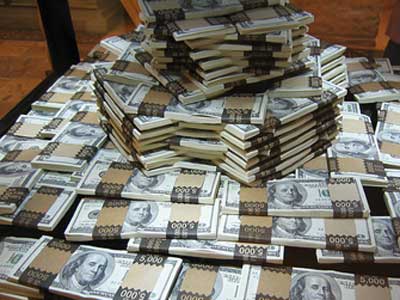 Just who’s getting those AIG bonuses?

For days, media commentators, Republican and Democratic Legislators, and just plain folks have been ranting about the news that AIG, the belly-up insurance-giant-cum-hedge-fund that has been bailed out by the US government to the tune (so far) of $175 billion, is handing out at least $165 million in bonuses to its executives. The outrage has been flying fast and thick. Sen. Chuck Grassley (R-Iowa) called for AIG executives to resign or commit suicide. Stephen Colbert screamed and waved a pitchfork. Rep. Barney Frank (D-Mass.), declared that some of AIG’s employees ought to be fired. President Barack Obama said he was “choked up with anger.” Sen. Harry Reid (D-Nev.), the Senate majority leader, promised late Tuesday that Democrats would propose legislation taxing the bonuses at severe rates unless the bonus contracts were renegotiated. At the White House press briefings, press secretary Robert Gibbs has been pelted with questions about what Obama is going to do to stop—or reclaim—the bonuses.

But in all the furor, one unanswered question has been who precisely is receiving this largesse. Andrew Cuomo, the New York state attorney general, has been on the case. On Monday, he subpoenaed AIG for the names of the executives who received bonuses. The idea, presumably, would be to try to publicly shame some of the executives into returning the money. And Cuomo received something of a boost from the White House. At the end of Tuesday’s press briefing at 1600 Pennsylvania Avenue, Gibbs said that the president is supportive of Cuomo’s efforts and is also “looking into” obtaining and making public the names of the AIG employees awarded bonuses. This was not a rip-roaring endorsement, but a signal that Obama wouldn’t mind if Cuomo succeeded in publicly humiliating these executives. After all, Cuomo’s endeavor makes sense: If it’s really so hard to get the money back from these folks (because preexisting contracts supposedly can’t be broken), taxpayers should at least know whose bank accounts they’re padding.

There are signs that Cuomo might be getting closer to obtaining the names. In a letter (PDF) he sent on Tuesday to Frank, the chair of the House financial services committee, Cuomo revealed that he has already gathered some information on AIG’s bonus pool. It’s not pretty:

Yes, you got that straight: AIG doled out over a million dollars to each of 73 employees in a year when the firm had perhaps the worst performance of any company in the history of capitalism. And eleven of those people don’t even work at AIG anymore. Could White House intervention bring about the disclosure of the identitites of the executives any sooner? That’s not clear yet. But with the White House scrambling to do something—anything—to show Obama’s outrage is real, jumping on the Cuomo bandwagon could be a good start.