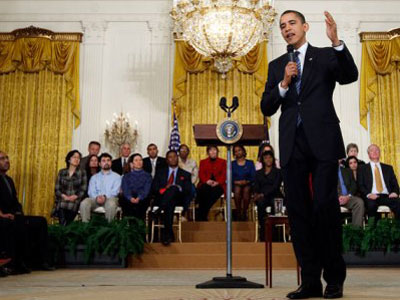 Government engagement of the citizenry via online technology is something to cheer. But the White House’s first-ever online town hall, held on Thursday, was hardly revolutionary in its content.

Almost 93,000 people participated in the town hall by contributing 104,000 questions that could potentially be put to President Barack Obama and by voting on the questions. Was this a significant level of participation? Perhaps. Obama, though, has said that he receives 40,000 letters at the White House each day. And 13 million people signed up to support the Obama campaign. On the other hand, only 3000 people submitted video questions for the CNN/YouTube Democratic debate.

Talking before a small audience in the East Room of the White House—in a scene set up well for the television cameras—Obama responded to questions that had been submitted online. And each query–even though voted to the top of the pile by the online participants—was rather conventional. The first essentially asked, what would you do to improve education in the United States? It was a softball. And Obama was off, providing his customary talking points about education. He certainly gave a substantive answer, calling for the right sort of reforms and for the right sort of increased funding, but it was nothing he hasn’t said many times before.

Question two, from Heather in Ohio, asked what Obama’s stimulus plan would do for those folks who are paying their mortgages but living from paycheck to paycheck. Obama launched into a long explanation of his administration’s plan to deal with the mortgage crisis, noting that interest rates have dropped and that many homeowners can now refinance their mortgages. Again, substantive and detailed, but nothing he hasn’t covered several times in recent weeks.

And so it went—for only half-a-dozen questions. That’s as many online queries as he fielded. There were no follow-ups. So the president could not be pressed on any points. The online participants, at this point, were passive—unlike the reporters at the recent presidential pres conference, who were allowed to push Obama after his initial answer to their questions.

And the White House violated the spirit of the endeavor by slyly undermining the effort of the online participants to place an unconventional question before the president. Of the 104,113 questions submitted, a number of them concerned marijuana legalization, and—whaddayaknow!—many of these questions were voted up the chain by the online participants. But rather than respond to a serious query on this subject, Obama pointed out that one of the more popular questions was whether legalizing marijuana would improve the economy. “I don’t know what this says about the online audience,” he joked. The crowd giggled. Thus, Obama avoided truly confronting an issue deemed significant by many of the citizens who bothered to join in.

After answering those six online question on obvious topics, Obama handled queries from members of the audience in the East Room. And it was a typical town hall performance. He gave lengthy and substantive replies, sounding intelligent and engaged, without making news.

All in all, this White House session—virtual or not—was much like a campaign event. It was designed to be a platform in which the president would look confident, in command, and smart (admittedly an easy assignment). None of the questions or questioners were challenging. He was not forced to deal with issues he doesn’t usually. This virtual/real meeting did not expand the debate beyond the usual inside-the-Beltway confines. It was still mostly a top-down event. So cynics might be tempted to label it a stunt. The question is whether it will lead to further development of practices that might actually enhance online civic participation in a manner that does empower citizens. Otherwise, such events will be more about the expropriation of technology than empowerment through technology

UPDATE: Turns out–no surprise–that the people who asked questions after the online queries had been invited to the White House for the session. Hand-picking questioners does seem to conflict with the aim of letting citizens propose and then select (by voting) questions the president should answer. Also, though Obama dismissed the marijuana legalization issue by referring to an easy-to-laugh-at question, reporters at the subsequent White House daily briefing asked repeatedly about Obama’s handling of the matter and his position on legalization (he’s against it). So those citizens who had organized and voted up questions on marijuana legalization were indeed able to elbow their way into the conversation. For them, the virtual town hall meeting might have paid off–even though Obama had belittled their questions.