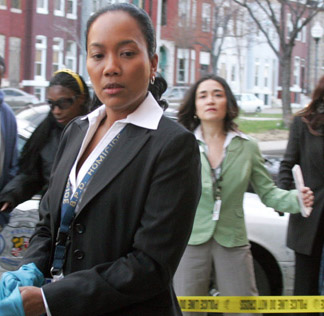 Bad thing about the death of newspapers: No more beat reporters to hold cops accountable.

Good thing: David Simon comes out of retirement to kick some ass on the streets of Baltimore.

In a recent Washington Post article, The Wire creator and former crime reporter looks into the shooting of an unarmed man by a police officer. The police department says it can’t reveal the cop’s identity; Simon calls BS and does the digging no other reporter—or blogger—is doing. And he concludes: “Half-truths, obfuscations and apparent deceit—these are the wages of a world in which newspapers, their staffs eviscerated, no longer battle at the frontiers of public information.”

Amen. Every time a beat reporter gets canned or a daily is shuttered, a public official smiles. More of Simon’s conclusions about the death of accountability journalism after the jump.Simon continues:

There is a lot of talk nowadays about what will replace the dinosaur that is the daily newspaper. So-called citizen journalists and bloggers and media pundits have lined up to tell us that newspapers are dying but that the news business will endure, that this moment is less tragic than it is transformational.

Well, sorry, but I didn’t trip over any blogger trying to find out McKissick’s identity and performance history. Nor were any citizen journalists at the City Council hearing in January when police officials inflated the nature and severity of the threats against officers. And there wasn’t anyone working sources in the police department to counterbalance all of the spin or omission.

I didn’t trip over a herd of hungry Sun reporters either, but that’s the point. In an American city, a police officer with the authority to take human life can now do so in the shadows, while his higher-ups can claim that this is necessary not to avoid public accountability, but to mitigate against a nonexistent wave of threats. And the last remaining daily newspaper in town no longer has the manpower, the expertise or the institutional memory to challenge any of it.