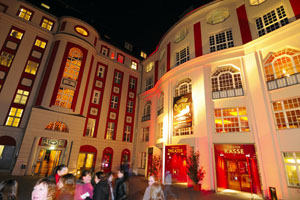 Mel Brooks’ “The Producers” is set to open in Berlin in May. It’s even being performed in a theater that used to have a luxurious “Führer’s Box” for Hitler. But how will Brooks’ musical, with its 20-foot swastikas and singing stormtroopers, be received? As Der Spiegel points out, the musical has already had runs in Vienna (modestly successful) and Tel Aviv. So it was really only a matter of time before it came to the Fatherland. According to the Berlin theater’s manager, advance ticket sales are doing well. Still, what a strange experience to see a fey, dancing, Hitler sing “Heil Myself” in the same theater where the real Hitler once watched “The Merry Widow.”