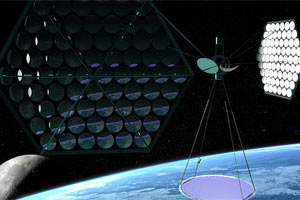 It does not matter to me that the Solaren Corp denies that their space-based solar farm, designed to take advantage of sunlight unfiltered by our dingy atmosphere, could be used to blow up buildings like in Independence Day, even if they try and make it explicitly clear:

[Solaren’s director of energy services Cal Boerman] also dismissed fears, raised in the past, that the transmission beam could hurt birds or airline passengers who stray into its path. The beam would be too diffuse for that. “This isn’t a laser death ray,” Boerman said. “With an airplane flying at altitude, the sun is putting about four or five times more energy on the airplane than we would be.”

Sure it isn’t a laser death ray… until I focus its stellar energy beam using the lenses secretly hidden in my fashionable spectacles and aim it directly at downtown Canada! Just a note: my plans to rule your puny little planet may interrupt Pacific Gas and Electric power service, as the company has agreed to buy enough electricity from it to power 150,000 homes once the array comes online in 2016, but that just helps my evil scheme, since not only will I be able to blow up your grocery stores and cinemas with my laser death ray, but you will also be prevented from watching TV. …But wait a minute. If you can’t watch my reign of blazing cosmic destruction on CNN, how will you know about my demands for all humans to relocate to the donut factories and start producing dozens more maple logs which shall then be shot in rockets to my space lair, where I’ll still be manning the aforementioned laser death ray? Curses! Well, you win this time, environmentally-conscious humans and your overlords PG&E, but I’ll be waiting.