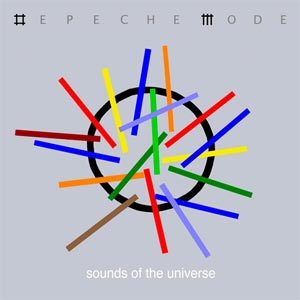 Depeche Mode is not New Order, although you could be forgiven for mixing them up, I suppose, if you’re not paying attention, or just looking at their keyboards, or maybe their career arcs. Actually, Depeche Mode’s unlikely, meteoric rise to super-fame and subsequent plateau most resembles The Cure’s: minimalist, early ’80s experiments give way to mid-’80s “alt-culture” idolatry, then early 90’s chart-topping mega-success, and finally a semi-retirement based on recycling (with varying degrees of success) the motifs of their earlier output. But there’s a reason New Order gets their own section on my record shelves, while D-Mode languishes on the ’80s shelf: they’ve always been a little, well, obvious for my taste, I guess, with their Peoples are Peoples and Personal Jesuses and I Expect to Find God Laffff-ing. Plus, what may be their artistic peak, 1990’s “Enjoy the Silence,” was basically a New Order homage, at best. But, weirdly enough, Sounds of the Universe, their 12th and latest album, achieves an intriguing complexity by looking to the lessons of early New Order, i.e., being a little obscure might not be such a bad thing.

First off, the title is our first giveaway something here is different. It seems to be a reference to “music of the spheres,” a philosophical concept that notes the musical properties of the movement and positions of the planets. The second clue is the cover: All previous DM albums have featured dramatic photography or (in their later years) faux-sloppy alt-grunge graphics, but here, things are flat and clean, with 17 brightly-colored lines intersecting a black circle at various angles on a gray field. While Pitchfork called it a reference to Pick-Up Sticks, it looks more like something by Malevich or Lissitzky to me, whose “suprematist” philosophy aimed to explore the fundamental through abstraction. No faux-gothy roses or cloudscapes here.

Also, come to think of it, the cover kind of looks like Movement, New Order’s grief-stricken 1981 masterpiece, to bring me back to the New Order point, which I’m sure isn’t making me any friends amongst DM fans. But while Movement‘s sharp pain and despair was a clear reaction to the recent suicide of Ian Curtis, Sounds of the Universe has a certain compelling, resigned wisdom to its darkness. Album opener, the nearly 7-minute “In Chains,” showcases the band’s rediscovery of vintage synths, and that buzzy, warm hum is instantly attractive. “Chains” starts off with typical pop-music lust—”The way you move/Has got me burning”—but immediately turns to the dark side, equating love (most likely unrequited) with entrapment. Lead single “Wrong,” with its swing rhythm, strange melodic turns, and absolute despair, has more in common with early blues than anything else, even though it sounds like lurching robots. “Peace,” with its soaring, Kraftwerk-y tones, uses superficially positive lyrics to achieve a creepy desperation: “Peace will come to me/Just wait and see.”

Of course, Sounds of the Universe is just about as long-lasting and varied as the actual universe, with 10 of its 15 tracks topping out over four minutes, and no less than six different physical and online versions of the album, including a deluxe box set of CDs, DVDs and a book for $100. But heck, they’re Depeche Mode, they can do what they want, and it’s nice to see them doing what they want musically as well. Ironically enough, while they call these sounds universal, this album is definitely, refreshingly, not music for the masses.