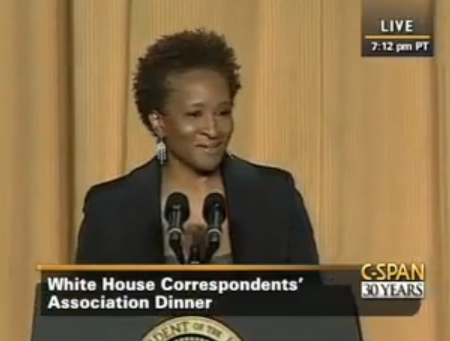 Comedian Wanda Sykes is getting some grief for joking about Rush Limbaugh at the White House Correspondents’ Dinner on Saturday Night. Sykes, referring to Limbaugh’s infamous claim that he hopes Obama fails, suggested that maybe Limbaugh was “the 20th hijacker” on 9/11, and offered that she “hopes his kidneys fail.” It took the right wing about 24 hours to figure out that kidney failure means death, and then they switched right into gear. Drudge breathlessly linked to a couple articles taking Sykes to task, asking “What was Obama thinking” for chuckling at the joke, and Fox News quoted unnamed sources calling her “mean-spirited,” “hateful” and “disgusting.” And today, sadly but perhaps inevitably, the White House just caved. Robert Gibbs made a statement as part of his daily briefing today saying that 9/11 is one of “a lot of topics that are better left for serious reflection rather than comedy.” Oh come on, didn’t anybody see The Aristocrats? When Gilbert Gottfried did his whole schtick right after 9/11? That was genius.

People are giving Sykes rave reviews for her bit at the dinner, but her languidly-paced softballs about giving the Queen an iPod seemed kind of tame to me, especially compared to Stephen Colbert’s head-spinning praise/takedown of George W. Bush back in 2006. I love Wanda, and let’s not forget, Openly Gay Comedian Speaks at White House Correspondents Dinner, but her jokes were about 50% throwaways, I thought. More signs of the Obama Comedy-pocalypse, or just her mellow style not really grabbing the audience? Watch the video and decide for yourself after the jump.