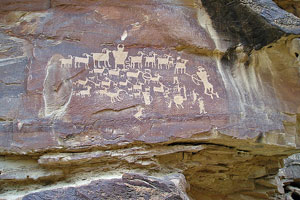 When Interior Secretary Ken Salazar blocked the leasing of hundreds of thousands of acres of public lands back in February, he could hardly have known that the move would leave him without a deputy for months on end. But Sen. Bob Bennett (R-Utah) was upset about the cancelation of the leases, which would have brought hundreds of new gas wells to central Utah’s beautiful Nine Mile Canyon. (The petroglyphs in the photo to the left adorn many of the cliff walls there.) In retaliation, Bennett put a senatorial hold on David Hayes, President Barack Obama’s nominee to be Salazar’s deputy. When Democrats tried to bypass the hold on Wednesday, Republicans stood with Bennett and filibustered Hayes’ nomination.

Back in the September/October 2008 issue of Mother Jones, Keith Kloor explained why you might not want to fill Nine Mile Canyon with gas wells:

“I just want you to know that I’m not here representing BLM,” archaeologist Blaine Miller reminds me as we drive along the coarsely graded road through central Utah’s Nine Mile Canyon. Nestled into the rugged, sparsely populated Tavaputs Plateau, the canyon is a virtual museum of prehistoric art, with an estimated 10,000 images pecked and painted on its towering sandstone walls. I’ve come to view the dazzling millennium-old renderings of hunters, shamans, and animals before, as Miller fears, they vanish under a coating of dust and grime, thanks to decisions made by his superiors at the Bureau of Land Management, the Interior Department division that oversees some 262 million acres of federal land…Miller, who wears large aviator glasses and speaks in a lazy cadence, is up in arms over a new BLM-approved plan that would bring 600 more gas wells and up to 1,000 truck trips a day through Nine Mile.

Unsurprisingly, the Bush administration went ahead with its plan to coat those images with dust and grime. But although the administration approved auctioning off the land in late December, it delayed actually handing out the leases or cashing the checks—effectively putting the fates of Nine Mile Canyon in the hands of the Obama administration. In mid-January, a court put a restraining order on the leases, and a few weeks later Salazar scrapped the whole deal, triggering Bennett’s hold on Hayes.

It gets even more complicated and juvenile. Salazar told Sen. Lisa Murkowski (R-AK) in a letter that he canceled the leases because the court had found that BLM “had failed to conduct an adequate air pollution analysis under the National Environmental Policy Act.” But for Bennett, illegality wasn’t an adequate excuse. TPM DC‘s Brian Beutler explains:

…Bennett demanded an inquiry into how the problems the court cited could be resolved, and Salazar vowed that he’d instruct Hayes to conduct the review as soon as he was confirmed. But Bennett was still not pleased. He said the report could be written without Hayes and now says he’ll only lift his hold when that review is completed. It’s unclear how this pissing match will be resolved. Bennett wants the review by the end of the month, but he doesn’t expect to get it by then.

So what will happen to David Hayes? As I explained yesterday, Democrats stand a decent chance of winning a revote if they get three of their absent Senators back for it and they hold onto at least one of Maine’s two Republican Senators, who both voted for Hayes. Until then, there will be a missing deputy in the Interior department because Bob Bennett is upset things didn’t go his way.

(UPDATE: Keith Kloor is up with his own take on this. Read it.)