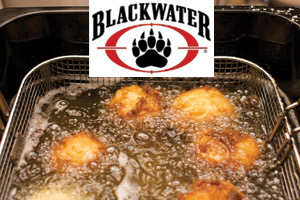 Blackwater may owe the government more than $55 million—and one restaurant-quality deep fat fryer.

According to a federal audit reviewing the private security firm’s work in Iraq, Blackwater failed to meet the terms of contracts worth more than $800 million. The audit, released on Monday, found that the company (which recently renamed itself Xe) regularly came up short on the staffing requirements outlined in two of its State Department task orders, issued under the multibillion dollar Worldwide Personal Protective Services (WPPS) contract. For instance, the audit notes, the firm didn’t supply enough personal security specialists for 16 of 19 months under a task order to provide guards in Baghdad and Ramadi—meaning that visiting dignitaries and other officials under the firm’s watch were potentially underprotected.

“The contract states that all positions must be filled 100 percent of the time and that Blackwater is to be assessed deductions when this level is not maintained,” the audit, a joint effort by the State Department’s Inspector General and the Special Inspector General for Iraq Reconstruction, notes. Though Blackwater’s “muster sheets”—schedules showing the number of personnel available for duty—”indicated that Blackwater did not provide the required manning for protection details in accordance with the contract terms,” the State Department failed to invoke a contract provision that would have penalized the company for failing to maintain the agreed upon staffing levels.

In the WPPS contract, the State Department pointed out that understaffing on high-threat protection contracts had proved a “major problem” in the past. And the agency included a clause in the contract to discourage this from happening again. “If manning falls below a minimum or the correct number of personnel are not deployed on time, a large reduction in the award price will be made in addition to not being able to invoice the hours/days not worked.” Government auditors determined that Blackwater should have been docked $55 million for its persistent manpower shortages. And the audit concluded “insufficient manning exposed the Department to unnecessary risk that could have been avoided by full staffing.”

Blackwater/Xe spokeswoman Anne Tyrrell says the company is still reviewing the audit, but disputed the allegation that the firm had not met its contractual obligations. “The government contracting officer determined that Blackwater was compliant with the terms and conditions of the contract at the time they were reviewing and therefore did not apply any deductions or penalties,” she says, adding that “Blackwater only billed for services provided.”

According to the audit, though, this is far from clear. Due to inadequate monitoring by the State Department’s diplomatic security division, “There is no assurance that personnel staffing data was accurate or complete and that correct labor rates were paid.” The audit recommends that the State Department seek a legal opinion on “whether charging deductions for past inadequate staffing would be appropriate”—and the agency has agreed to do so.

Blackwater was also called out for $127,364 in “unallowable travel costs” expensed by contractors assigned to Baghdad and Hillah. As of February, the State Department had been able to recoup $56,457, but $70,907 remained outstanding. “We have not been informed of what the report is referencing but would work with the Department of State to reach a resolution if it became necessary,” says Tyrrell. Given that Blackwater raked in over $1 billion before being booted from Iraq in May, these costs may appear somewhat trivial, but they represent the larger free-for-all in Iraq, when, after the invasion, contracts—along with duffle bags full of cash—were going out the door without proper oversight.

On other parts of the review, Blackwater fared well. Auditors found the firm’s equipment, along with the vetting and training procedures for its personnel, were well within the terms stated in its task orders. As for the manpower discrepancies, auditors lay blame primarily on the federal government’s contract management and accounting practices, which they found to be ill-suited to the task at hand. “Department officials in Iraq did not establish or perform measures to confirm the accuracy of labor costs used as the basis for contract billing. Monthly invoices from the contractor were paid without adequate review of support documentation.”

And, while the audit commends State Department officials for keeping tabs on the guns and vehicles the government provided to Blackwater, the same can’t be said of the agency’s monitoring of other federal property issued to the company: “…Department oversight of all other government-furnished property was inadequate, and contractor lists were incomplete and inaccurate and therefore unreliable.”

Due to this lax oversight, a handful of items—including binoculars, body armor, and walkie-talkies—have apparently gone MIA. Also unaccounted for: a Fagor brand deep fat fryer. “No word on the fryer yet,” says Tyrrell, who’s currently investigating its whereabouts.