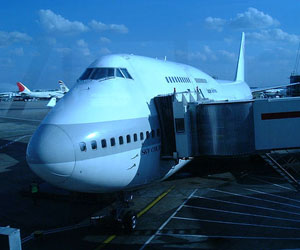 Photo used under a Creative Commons license by flickr user <a href="http://www.flickr.com/photos/imgeorge/">i'm george</a>

Remember last fall when the CEOs of General Motors, Ford and Chrysler flew on corporate jets to Washington, D.C., to plead for a taxpayer bailout? The resulting bad publicity prompted GM to try to prevent the public from tracking its planes in databases compiled by the Federal Aviation Administration.

That got ProPublica interested in how many other companies had asked the FAA to excise their planes’ tail numbers from records tracking private flights. So in December, ProPublica filed a request under the Freedom of Information Act for a complete listing.

Earlier this month, the FAA concluded that the information was public and planned to release the list on Tuesday. But on Monday, an organization representing corporate jet users went to court to block the release of the records.

The National Business Aviation Association filed a motion (PDF) for a temporary restraining order on Monday in federal district court in Washington, D.C. The group, which learned of the request from the FAA, argues that the records should be exempt from disclosure because they contain confidential commercial information that was submitted voluntarily.

Releasing the list would also generate a higher level of interest in the companies that had tried to block public knowledge of their aircrafts’ movements, it said.

“Upon learning that a specific aircraft tail number is included in the [blocked] list, a member of the public could readily track down the identity of the owner (through the FAA’s public aircraft registry database) and attempt to investigate the reason the owner seeks blocking of the aircraft data,” Steven Brown, the association’s senior vice president wrote in a March letter objecting to the FOIA request.

The information ProPublica is seeking would include the company’s name and address and the tail numbers of all the planes it wants blocked. The public already can research airplane ownership using the aircraft registry posted on the FAA’s Web site.

To manage the nation’s air traffic, the FAA collects information from all planes that use the public airspace, including which airports the planes fly into and out of. The flight plans are public and some groups have posted them on their Web sites.

But under a little-known program called the Block Aircraft Registration Request Program, companies can request that their information be kept hidden to protect the security of their executives or to prevent disclosure of business trips that might affect stock prices.

Companies make the request through the business aviation association, which sends them to FAA each month. The FAA then reviews the requests and removes the planes from the public database.

The FAA reviewed the association’s objections to ProPublica’s FOIA request and determined on June 1 that the information did not qualify for an exemption.

“The NBAA list is not a trade secret, nor is it commercial or financial information within the meaning of the FOIA,” wrote Carol A. Might, director of system operations litigation.

The FAA stands by its position, spokeswoman Laura Brown said Tuesday. In court, a Justice Department lawyer representing the FAA agreed to withhold the list until the judge can hear arguments from both sides.

“We were pleased to learn earlier today that the FAA agrees that these documents should be disclosed under the Freedom of Information Act,” said Richard J. Tofel, general manager of ProPublica. “We can’t imagine why the list of companies that want to keep the movements of their aircraft a secret should itself be a secret. We’ve retained counsel to evaluate NBAA’s lawsuit, and are considering our legal options.”

Mark Duell, vice president of air traffic Web site FlightAware.com, said he wasn’t aware of any incidents in which an executive’s safety or competitive interests were jeopardized by the information his company publishes online.

“All the flights within the national airspace are using resources being paid for by everyone since it’s publicly funded,” he said. “It’s a freedom of information and transparency issue to us.”

The business aviation association did not comment further on its attempt to prevent the release of records, but released a statement supporting the blocked aircraft program.

The program is the result of years of negotiations with the FAA. In 1995, several private plane groups petitioned the FAA to limit the air traffic data to a need-to-know basis. With the Internet causing the number of Web sites posting the data proliferating, the association began working with the FAA on a system to protect the privacy of business jet users.

“The [BARR] Program was established over a decade ago in response to recognized security concerns and competitive considerations,” spokesman Dan Hubbard said in a statement. “NBAA has long supported the BARR program and believes the reasons for its creation remain relevant today, given that access to information about certain flights can be used to inappropriately impact the competitive landscape.”

Michael Grabell covers transportation for ProPublica. He was a reporter for The Dallas Morning News, and was a 2007 finalist for the Livingston Award for Young Journalists.