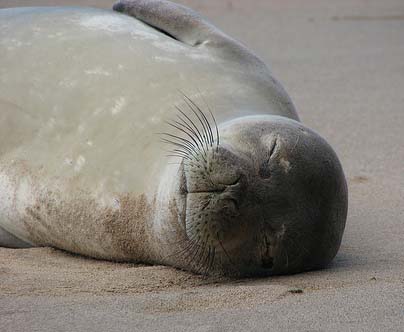 Photo from Flickr user <a href="http://www.flickr.com/photos/thievingjoker/">theivingjoker</a> under Creative Commons license

The cute, endangered animal for this week is the state mammal of Hawaii, the Hawaiian Monk Seal. According to forbidding signs posted on Hawaiian beaches, the monk seal is “one of the most endangered species in the world,” with only 1,400 individuals. The Hawaiian Monk Seal lives in the quiet Northwestern islands of Hawaii like Kawa’i whose golden beaches and jungled peaks appear in movies from South Pacific to Jurassic Park. If you do happen to see a monk seal, you wouldn’t be blamed for thinking they’re dead since the animals always seem to be lying comatose on the sand while warm Hawaiian waves crash over their rotund bodies. Approaching the be-whiskered beasts is a federal crime, and a health risk: because these seals evolved without human contact, they have little fear of people and will bite. Hard.

When not lazing under a tropical sun, monk seals eat fish, squid, and even lobster when they can get it, reaching up to 600 lbs in weight and 7 feet in length. Continuing commercial development, disease, fishing nets, and global warming are current threats to the seal population, especially to new mothers who do not eat and lose hundreds of pounds while nursing their young for six months. As human development continues, Hawaiian Monk Seals are being seen on the more inhabited islands of Hawaii: the Center for Biological Diversity,  Ocean Conservancy, and (as of last week) NOAA are proposing the federal government expand the protected seal habitat to include the main islands, but no word yet on when, or if, the government will revise the seals’ protected range.

To learn more about the Hawaiian Monk Seal and see a gallery of pictures, you can visit the Kaua’i Monk Seal Watch Program’s website here.