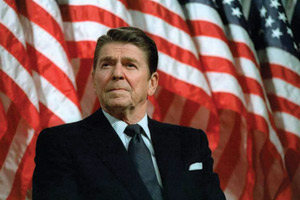 There’s been a lot of Ronald Reagan worshipping going on in Washington this week–among Democrats. On Tuesday, President Barack Obama signed a bill that will create a commission to plan events to celebrate what would have been Ronald Reagan’s 100th birthday in 2011. Launching the commission, Obama said,

President Reagan helped as much as any president to restore a sense of optimism in our country — a spirit that transcended politics, that transcended even the most heated arguments of the day. It was this optimism that the American people sorely needed during a difficult period — a period of economic and global challenges that tested us in unprecedented ways.

On Wednesday morning, when a statue of Reagan was unveiled in the Capitol Rotunda, Democratic Senate Majority Leader Harry Reid declared,

That optimism, charm and good humor is such a central part of what President Reagan brought to our country.  But behind that grin lay a resolve that kept Americans safe and kept America strong….[A]t the height of the Cold War, President Reagan’s characteristic confidence warmed and reassured America.

At that ceremony, House Speaker Nancy Pelosi lavished more praise on Nancy Reagan than on her husband. But she did hail Ronald Reagan’s “civility” and his “commitment to national security and his success” in that field.

Okay, it’s one thing to make nice with a dead president whose wife has been a valuable political ally in the stem cell fight. But do Democratic leaders have to contribute to the myth that Reagan helped save America in the gloomy days of the 1980s? Reagan preached a hardline approach to the world that coddled anti-communist dictators and left nuns and dissenters dead in such countries as El Salvador, Argentina, and Guatemala. He presided over the de-industrialization of America. (Steel industry? Who needs a steel industry?) His administration purposefully aimed to bankrupt the federal government specifically to create pressure for cutting social programs. He wasted billions on missile defense. He busted a union. He did nothing when the AIDS epidemic struck. His administration was marked by numerous scandals and ethics controversies. More than 200 US Marines were killed in the 1983 Beirut barracks bombing after his ill-advised deployment of troops to Lebanon, and the Reagan administration never caught the evildoers.

There was not much that was warming, reassuring, or optimistic about the defining policies of the Reagan years. My old college pal Will Bunch recently made the case against Reagan in his book Tear Down This Myth. But years earlier, I did the same in an abbreviated form and composed a list of “66 things to think about when flying into Reagan National Airport”. Not everyone under a certain age will get all the references, but the gist is clear:

Obama and Reid surely know all this. But singing the praises of past presidents deemed popular is a political obligation. Still, Dems do go overboard on Reagan. (You don’t see Republicans hailing the prescience of Jimmy Carter, who called for taking tough steps to reduce the country’s dependence on oil.) Reagan did possess a sunny disposition. But many of his policies and actions were dark and destructive. Politics is politics; so give him a statue and a commemoration. But don’t give him history.