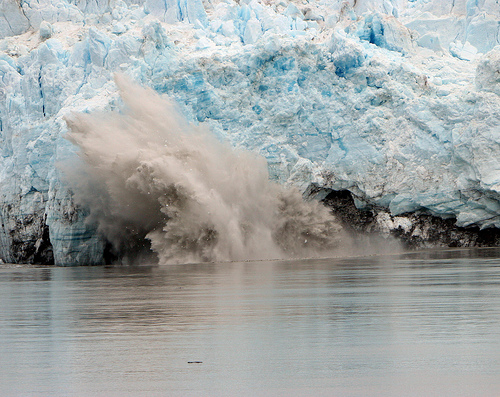 Most people accept that politicians do stupid things in the service of parochial interests and paleolithic ideologies. It’s a problem as old as Congress. Yet occasionally a Congressman does something beyond stupid–something that causes thinking people to wonder if this representative has the intelligence or integrity to serve in public office. These moments are like ice sheets splitting off the Arctic Shelf and sliding into the ocean–they’re fun to watch and yet totally depressing.

Today’s example comes from Senator James Inhofe (R-Okla), who has ordered a Congressional investigation into how the EPA “suppressed” a report that questioned the science behind climate change. Grist notes that the “suppressed” report was written by an economist with no training in climate science, includes no original research, cites old and irreputable references, and was nonetheless accepted, unsolicited, by the EPA’s climate scientists for consideration. If the meagreness of the report’s policy impact is a scandal, then so is the fact that Joe the Plumber isn’t the go-to guy for rewiring your attic.

And yet Inhofe tells Fox News that this EPA economist, Alan Carlin, “came out with the truth” and that “they don’t want the truth at the EPA.” Inhofe really could be this stupid, or there could be a deeper, more cynical political logic at work. Fox concluded that “the controversy is similar to one under the Bush administration–only the administration was taking the opposite stance.” Fox’s message to its readers seems to be that the legitimate James Hansen scandal and the phony Alan Carlin “scandal” cancel each other out. It’s all just politics.

If you believe that, how do you decipher the truth behind climate change? One way would be to start with what you already think you know and then look for those scientists–or economists posing as scientists–who support that position. Last week Rep. Paul Broun (R-Ga) claimed that global warming was a “hoax“–a statement, impossible to back up with more than partisan intuition, that was met with applause on the House floor.  It must have been quite a spectacle: A big chunk of legislators, smaller than in years past but still frozen in their beliefs, taking a jolly plunge into insanity.