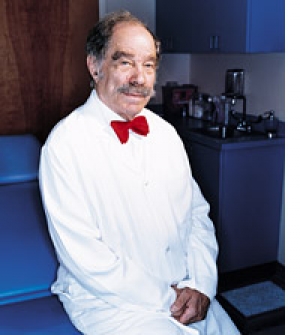 With the murder of Dr. George Tiller, women in desperate straits will find it even harder to locate a practitioner to terminate a pregnancy past a certain point (most physicians won’t do them past about the first trimester). And if you wonder why a woman would need such a late abortion, you need to do some reading. A few years back, we profiled Dr. William Rashbaum, another late-term provider who worried a great deal about who would replace him. He has since passed away.

Back in his office, Rashbaum faces his next crisis: A shaky 29-year-old mother of two, sitting next to her husband, is set the following day to abort her 18-week fetus, which is developing without a brain. Visibly uncomfortable, the Long Island couple begins talking about referrals and medical history. The petite and pretty blond woman, a black T-shirt stretched over her bulging stomach, tells Rashbaum it was hard finding a doctor to end her pregnancy at this stage. He cuts off the measured discussion, pops in his hearing aid, and launches in: “The first thing I need to tell you is that you must mourn.” The words, or maybe it’s the gravelly voice, act as a cathartic, and the woman begins to cry. He reassures her that it’s okay to be angry. What’s happening to her isn’t right or fair. Rashbaum also encourages her to kick her husband in the groin if at any point he tells her not to cry. Her fears quickly bubble to the surface. “Am I a freak?” she asks, insisting that she’s great at pregnancy, even forgoing sugarless gum to ensure the health of her unborn child. She says she knows she couldn’t have prevented this abnormality but still asks if she did something wrong. “Yeah,” Rashbaum quips. “You thought bad thoughts.” The woman and her husband laugh nervously, but they’re laughing. There are other fears. They want to have another child (they have two boys; this was a girl). He tells them that out of 21,000 late-term abortions he has performed, only 18 women lost the ability to have children. He has also never lost a patient and says he’ll be furious with her if she’s the first…. After more nervous laughter, the woman broaches her greatest fears. She’s not sure she wants to know the details. It’s difficult to relinquish her role of protecting a fetus that has grown inside her for four and a half months. Welling up with tears again, she asks if it will feel pain. She doesn’t want to hear much more.