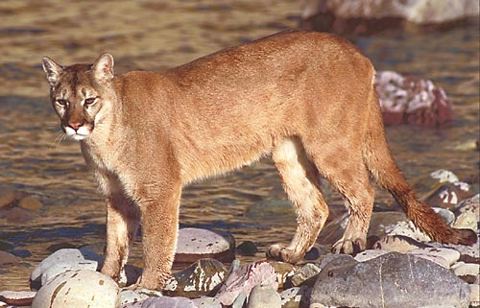 Photo courtesy of the United States Department of Agriculture

The new study in PLoS ONE looked at lions and cougars killed by hunters over the past 15 to 25 years in Africa and the western US. The data suggest that management agencies routinely adjust quotas to control rather than conserve the big cats in areas where humans or livestock are believed threatened.

The reason sport hunting takes a significant toll on large felines is because replacement males routinely kill their predecessors’ cubs, forcing female lions into estrus to improve their own mating opportunities.

The researchers confirmed this effect by comparing the impact of hunting on lions, cougars, leopards, and black bear populations. Male black bears don’t routinely kill cubs of other males.

The results show that lion and cougar populations have suffered the greatest decline in places that sport hunting has been most intense in the last 25 years. Leopards are not as badly affected as lions and cougars, perhaps because they benefit from reduced numbers of lions. Black bears, by contrast, appear to be thriving despite thousands of bears killed by hunters.

The study results point to the need for new approaches to protect humans and livestock and to manage sport hunting without endangering vulnerable species. One possibility would be to restrict sport hunting to older males whose offspring have matured.

Combine this study with another recent investigation in PNAS showing that, in stark contrast with most predators, humans now exploit high proportions of prey populations and target large reproductive-aged adults. As a result, species hunted and fished by humans show particularly rapid and dramatic changes in phenotype (what an organism looks like as a consequence of the interaction of genetics and environment).

Average phenotypic changes in 40 human-harvested species were found to be much more rapid than changes in natural systems—outpacing them by more than 300 percent.

In fact species hunted or fished by humans now show some of the most abrupt trait changes ever observed in wild populations—rewriting the book on how fast phenotypes are capable of changing. The authors conclude that these changes (typically in the size of the animals and age of adulthood) can and do imperil populations, industries, and ecosystems.

Keep in mind we can’t conserve ecosystems without their big predators, something I wrote about in GONE.