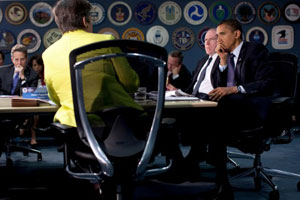 Is Larry Summers spending too much time out at the clubs on work nights? It certainly seems that way. Back in April Summers, President Barack Obama’s top economic adviser, was caught napping during a meeting on regulating the credit card industry. Last week, Summers was at it again, refusing to lose his right to snooze during a hurricane preparedness meeting. In a true stroke of genius, the White House has posted the latest photo of sleepy Larry on its website, so we can reproduce it for you here. (That’s him to the right of the big chair that takes up most of the foreground.) Maybe the publicity is Obama’s way of giving Summers a bit of a nudge?