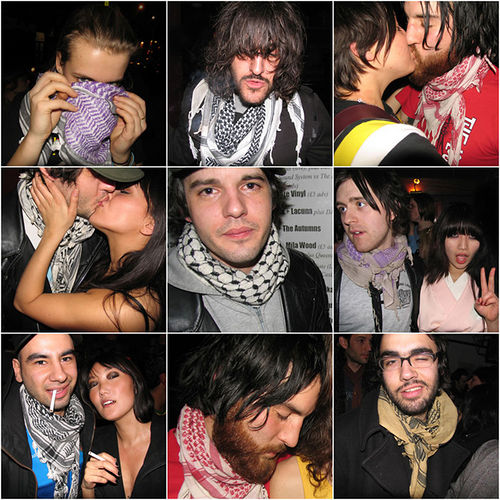 Oh, the keffiyeh hipster trend. How long have I waited, in vain, for you to die? Once upon a time, the keffiyeh (spelled many ways but worn only one) was headdress for PLO leader Yasser Arafat and symbol of Palestinian nationalism. Now, thanks to a late aughts explosion of popularity, the symbol of intifada is second only to the Che t-shirt for its global ubiquity and collegiate rebel chic. Today, you can buy this fashion juggernaut from half the street vendors on Earth for a cool five bucks. So with all this popularity, why is the the last keffiyeh factory in Palestine about to go out of business?

That’s because the one you’re wearing (and, increasingly, the ones Palestinians are wearing) are now made in China.

Here’s how it happened: Back in ’87, during the first intifada, intifadniks couldn’t get enough of Palestinian-made $25 scarves. Looser export restrictions meant that Israelis could rep them too, and slowly but surely the scarf and its emblematic pattern began appearing in the West. By the time the second intifada happened in 2000, hardcore activists and the super cool already had them. Then the keffiyeh trend reached its tipping point, and hipsters’ insatiable lust for the scarf lured Chinese manufactures into the gig. Fast forward a decade, and Chinese keffiyehs are the norm.

Ironically, global support for Palestinian-statehood-as-fashion-accessory has put yet another nail in the coffin of the Occupied Territories’ beleaguered economy. What’s next?