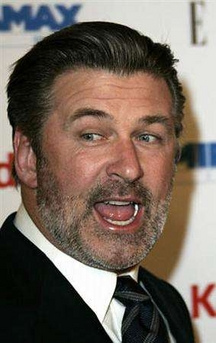 Alec Baldwin: leading man, comic genius, bad dad, ultra-liberal pontificator, … member of Congress? Yep, the troubled Hollywood actor, enjoying a resurgence thanks to the popularity of NBC’s 30 Rock, tells Playboy that he’s looking to join the party on Capitol Hill in 2012, assuming a suitable seat becomes available. “The desire is there, that’s one component,” he says. “The other component is opportunity.”

From the actor’s perspective, the timing is perfect. His current contract with NBC expires in 2012, just when his new gig would kick in. Celebrities-turned-politicians are a fixture in American politics: Ronald Reagan, Arnold Schwarzenegger, Jesse Ventura, and, most recently, Al Franken, to name a few. But is Baldwin worried that he’ll be perceived as just another Hollywood celebrity trading his fame for political power? Nope. He’s particularly confident when comparing himself with California’s governor. “His only credentials are that he ran a fitness program under some bygone president,” Baldwin says. “I’m (Alexis) de Toqueville compared to Schwarzenegger.”

Which state would Baldwin most like to represent? Not California. “Who wants to live in California?” he joked. Connecticut meets his approval, particularly if he can face off against Joe Lieberman. But New York seems to be his most coveted spot–if there’s a spot open in 2012, that is. “People get sick, die. They’re offered lucrative deals and want to cash in and make money for their retirement. People misstep. Unfortunately, an opportunity for me may mean bad things for someone else.”